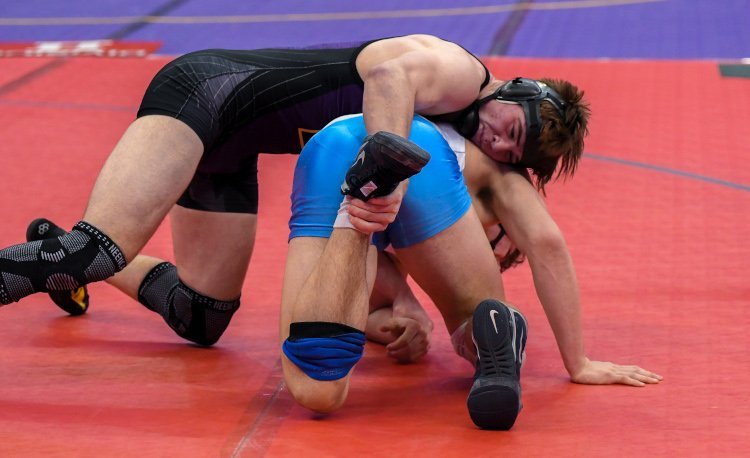 STORY–Berkshire senior Lucas Stoddard is one win away from becoming the Badgers’ first state champion since 2008.

Stoddard, who is making his third trip to the OHSAA State Wrestling Championships, won three straight matches over the weekend to advance to Sunday night’s Division III 190-pound title bout.

Lucas Stoddard @BHSBadgerDen not satisfied with a semifinal win, “We got one more!” pic.twitter.com/6qdTOaidnU

Stoddard’s title run started on Friday with a 55-second pin over North Union’s Shan Swank. He edged Liberty Center’s Owen Johnson in the quarterfinals on Saturday morning, 3-2, and then held off Ayersville’s Abe DeLano in Saturday night’s semifinal round, 6-2.

He’ll wrestle a familiar opponent in the championship round as he’ll face Milan Edison’s Logan Lloyd. Stoddard and Lloyd met in the 182-pound third-place bout last season with Stoddard earning an 8-0 major decision.

Stoddard is one of six Chagrin Valley Conference wrestlers to earn All-Ohio honors.

“Matt Ellis is a great wrestler,” said Orange coach Adam Kriwinsky. “Those were two of the top wrestlers in the state in Division II. It was a tough match, a tough loss. Kudos to them. They had a great game plan and it was an awesome match.”

Allen will wrestle Carrollton’s Josh Carman in Sunday morning’s consolation semifinals. With a win, Allen would wrestle for third place. A loss would send him to the fifth-place bout.

“It’s a mental game at this point,” Kriwinsky said. “He’s got to let that one go and get refocused and come back and take third.”

Perry’s Brock Christian also positioned himself for a third-place finish.

Christian, who placed seventh last year, won his Division II 126-pound state opener on Friday and then dropped into the consolation bracket, where he won two straight bouts, 7-1 and 6-4 in sudden victory overtime.

West Geauga’s Jack Sparent and Chagrin Falls’ Sam Partain both will wrestle for seventh-place in Division II on Sunday.

He won back-to-back matches in the consolation bracket before falling to Wauseon’s Lawson Grime, 5-3, in the consolation quarterfinals. He will wrestle West Holmes’ Dylan Strouse in the seventh-place bout. Sparent placed eighth last season.

Hawken’s Patrick Reineke will wrestle for seventh place in Division III at 120 pounds.

Reineke reached the quarterfinals before dropping into the consolation bracket after a loss to the defending 113-pound state champion. He won 6-3 to earn All-Ohio honors but dropped a 3-0 decision to Mapleton’s Brock Durbin in the consolation quarterfinals. Durbin was eighth at state last season.

Reineke placed eighth at state as a freshman and seventh as a junior.