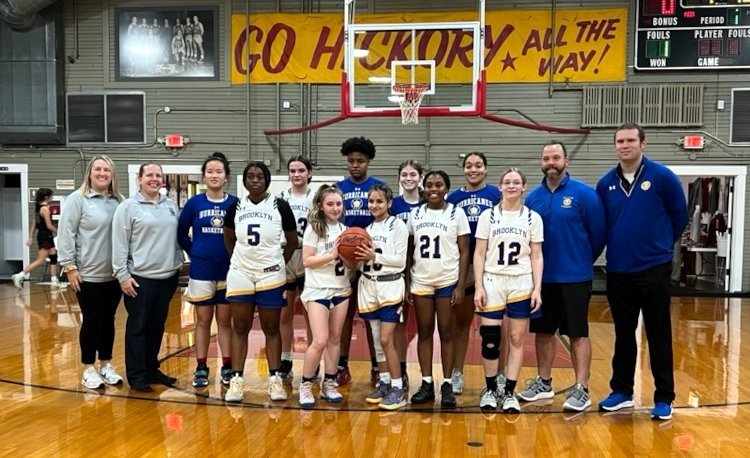 The Hurricanes and Dukes played that game at the iconic Hoosier Gym in Knightstown, Ind., where parts of the blockbuster movie “Hoosiers” was filmed.

“It was fantastic,” said Brooklyn head coach Jon Holko. “I was glad the JV played first so I could soak it all in and kind of remember my childhood and all the scenes from the movie.”

Hoosiers was loosely based on Milan High School’s run to the 1954 Indiana state championship.

Milan boasted an enrollment of just 161 students but that didn’t stop the Indians from an unprecedented run to the single-class state title with a 28-2 record. Milan’s run became known as the “Milan Miracle” and inspired the major motion picture that starred Gene Hackman as Norman Dale, the new head coach at Hickory High School.

Holko grew up with the film, but many of his players were first introduced to it during the four-hour bus ride to Indiana on Wednesday.

“They knew a little bit of the background of the movie,” Holko said. “It’s kind of funny, because when “Jimmy Chitwood” hit the game-winner at the end of the movie I heard a lot of cheering in the back of the bus.”

That introduction to the movie allowed the Brooklyn players to savor the opportunity to play a game on the famous court.

“When they got there, they were just kind of looking around and thinking like, ‘Oh, we’re a part of history,’” Holko said. “The toughest aspect of the game was getting them to focus on it and understanding that it wasn’t a scrimmage, it actually counts on our record.”

For senior Shariah Gailes, Wednesday’s game at Hoosier Gym was even more special considering she celebrated her 18th birthday with a game-high 16 points in the win.

“That was historic,” Gailes said. “I’ll remember it for the rest of my life.”

After watching the movie, Gailes drew inspiration from the underdog Hoosiers.

She didn’t hit a game-winning shot the way Bobby Plump did for Milan High School in 1954, the shot memorialized by Jimmy Chitwood in the movie, but she and her teammates won a game they’ll never forget.

“They came in and were the underdogs, so I just wanted to get the win because we traveled all this way,” she said.

Wellington led the Hurricanes early but Brooklyn rallied in the fourth quarter to pull out the win in the back-and-forth game.

Genesis Caraballo also scored in double figures for the Hurricanes with 10 points, Jade Riedel contributed to the win with seven, and Taylor Ruffin added six points.