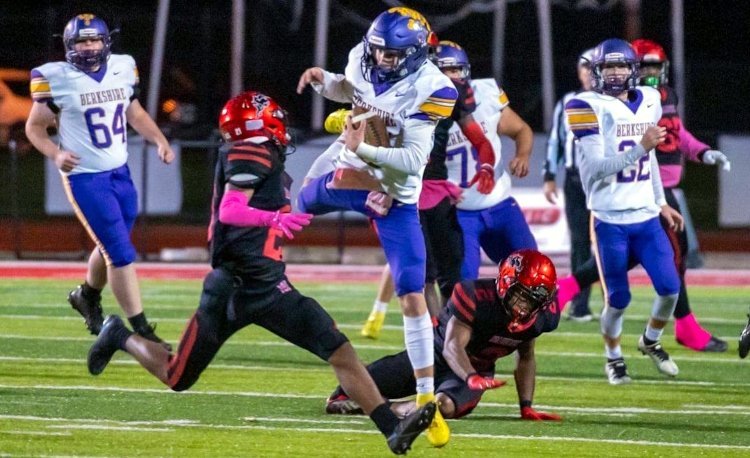 Each athlete was nominated by his or her coach. All statistics incurred from Monday, October 3, 2022 through Sunday, October 9, 2022. 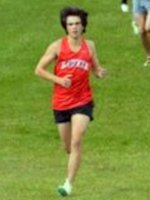 Name: Nick Garcia-Whitko
School: Hawken
Grade: 11
Stats: Placed sixth at the Legends Meet with a time of 16:15.20
Coach’s Quote: “I was incredibly excited to get Nick back to competing this past weekend and see how he would perform,” said Hawken coach Kim Curtis. “Once again, he paced the Hawks in finishing sixth with a time of 16:15.20. Nick provided the leadership we have grown to expect, resulting in our boys’ team achieving first place in a crowded field that included several state-ranked teams.” 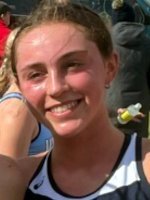 Name: Sylvia Vosicky
School: Kirtland
Grade: 10
Stats: Ran a lifetime best 20:48 at the Legend’s Meet, moving her to No. 22 on Kirtland’s all-time top 25
Coach’s Quote: “Sylvia ran her best race of the season Saturday and is in great shape heading into conference week,” said Kirtland coach J.P. Moran. “She went out with her teammates Ainsley and Izzie and together the three of them all broke 21 and were in the 20s. The trio had a great day leading us to an overall good team place. It was the perfect springboard to the championship meets ahead of us and the postseason.”

Name: Meghan Zuccaro
School: Orange
Grade: 12
Stats: Ran a new PR of 22:49 at the Legend’s Meet
Coach’s Quote: “Meghan Zuccaro has been an amazing runner to have on the team this season,” said Orange coach Rachel Frutkin. “As a first-year cross country runner, she’s putting down impressive times. Her latest race at Legends yielded a 14-second PR from her previous best at Cardinal. Meghan’s been a great teammate and competitive athlete and we’re lucky to have her on the team.” 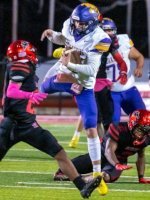 Name: Josh Brown
School: Berkshire
Grade: 12
Stats: Caught nine passes for 175 yards and three scores, ran for 18 yards on one carry
Coach’s Quote: “Josh Brown is an individual with high character, a leader, and a captain for our team,” said Berkshire coach Josh DeWeese. “He sets the bar high for his teammates. He had an amazing game this past Friday against Harvey. On top of having a high production night, Josh had four catches on our last drive of the night for 75 yards to put the team in position for the win. He accounted for all but two yards on the last drive in the final 80 seconds of the game.” 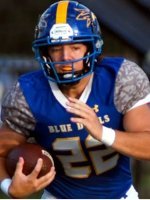 Name: Rory Corrigan
School: Independence
Grade: 12
Stats: Ran for 197 yards on eight carries with three touchdowns; recorded 12 tackles, including two for a loss, and a sack
Coach’s Quote: “Rory had his best overall game of the year on Friday,” said Independence coach Rick Adams. “He ran with great energy and was the QB of the defense, calling out plays and directing teammates to get into proper alignments.” 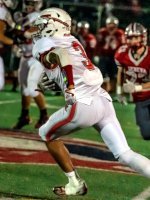 Name: Christian Cunningham
School: Edgewood
Grade: 12
Stats: Caught nine passes for 206 yards and touchdowns of 33, 41, and 70 yards; recorded five tackles on defense, including one for a loss
Coach’s Quote: “Christian came out and showed why he is one of the most gifted athletes in Ashtabula County,” said Edgewood coach Olajuwon Cooper. “When we needed a play, he stepped up and delivered when it mattered most. His 70-yard TD reception with four minutes left in the game put us ahead for the first time in the game. He’s been a stalwart for us in all three phases of the game all season.” 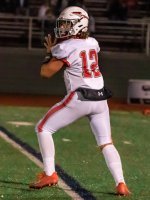 Name: Tony Hall
School: Edgewood
Grade: 11
Stats: Completed 16-of-26 passes for 378 yards and four touchdowns (41, 33, 70, 65); recorded three tackles on defense
Coach’s Quote: “Tony played a heck of a ball game,” said Edgewood coach Olajuwon Cooper. “He consistently got the ball to our playmakers in space and allowed them to work. More importantly, Tony displayed great leadership in helping us bounce back from a tough loss against Geneva the week prior. Tony continues to evolve as a leader and playmaker for us.” 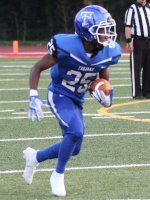 Name: LeJon Woods
School: Trinity
Grade: 12
Stats: Carried 31 times for 127 yards, caught one pass for 50 yards and a score; recorded eight tackles on defense with one tackle for loss, and an interception; returned three kicks for 27 yards
Coach’s Quote: “LeJon sparked our team to a come-from-behind victory over Brooklyn,” said Trinity coach Jeff McSweeney. “LeJon refused to let us lose that game, even though we were down late. He’s not the biggest guy out there, but he has the heart of a lion. He is a true leader both on and off the field.” 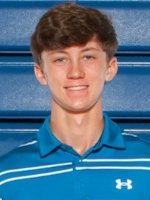 Name: Mark Pillar
School: Independence
Grade: 11
Stats: Shot a 78 at the district tournament to earn a state tournament berth
Coach’s Quote: “Mark has been the top golfer in the CVC as well as the greater Cleveland area for the past three seasons and this year is no different,” said Independence coach Ryan MacRaild. “He has continued to compete at the highest level, most recently finishing second in the district tournament and qualifying for the state tournament yet again. His work ethic, attention to detail, and technique have helped him stay ahead of the pack and compete with some of the top golfers in the state.” 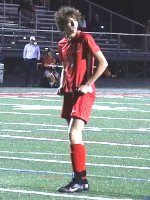 Name: Jonathan Drockton
School: Hawken
Grade: 11
Stats: Scored three goals with two assists in two games
Coach’s Quote: “Drockton is the heartbeat of our team,” said Hawken coach Vlad Muresan. “His performances in midfield and defense have been huge for our team this season. Scoring and assisting in each game that we played last week, Drockton showed his quality and his ability for the Hawks.” 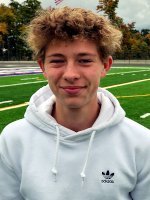 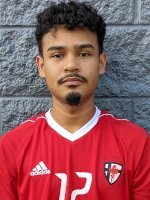 Name: Marcos Armendariz Perez
School: Harvey
Grade: 12
Stats: Scored three goals with two assists in two wins
Coach’s Quote: “Marcos has really taken on a vocal leadership role this season,” said Harvey coach Natalie Sisler. “He is constantly communicating on the field putting our team in a position to be successful. His aggressive play allows him to be extremely versatile on the field in both an attacking mid or defensive positioning depending on the situation and opponent. Marcos has really stepped up his senior season and as a staff, we are extremely proud of his development over the course of his career.” 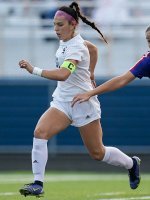 Name: Frankee Flesher
School: West Geauga
Grade: 12
Stats: Scored seven goals in two wins
Coach’s Quote: “Frankee’s performance to secure the 2022 Co-CVC championship for West G was nothing short of amazing,” said West Geauga coach Kori Jesenovec. “Her effort and work rate for her teammates on the field has been vital throughout this year’s CVC matches. All teams, especially those in the CVC, know her and her ability to single-handedly change the game and this past week was the cherry on top in her senior year.” 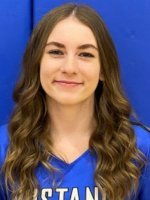 Name: Abby Collins
School: Grand Valley
Grade: 12
Stats: Recorded 65 digs, 91 receptions, six assists, three kills, and one service ace
Coach’s Quote: “Abby helps lead her team through communication and hard work on the floor,” said Grand Valley coach Erin Smolinski. “It shows in that she does everything she can to make sure the ball never hits the floor. Abby is an all-around great player, just one of those kids that every coach wants to have on their team.” 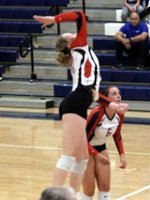 Name: Madison Miner
School: Perry
Grade: 10
Stats: Recorded 46 kills, 17 digs, 16 service receptions without an error, seven blocks, five aces, and four assists in eight sets
Coach’s Quote: “Madison again led the Pirate offense this week bringing us four-set wins over Geneva and West Geauga,” said Perry coach Mike Fitzgerald. “Madison averaged 5.75 kills per set in the two matches netting 46 total kills and a hitting percentage over .300. Madison had five aces from the service line. Madison was just as impressive with her defense. She had seven blocks in the front row and also 17 digs and 16 serves received with no errors in the back row. Madison is one of the top-ranked hitters in the area and will continue to grow throughout her volleyball career. In the latest News Herald stat report, Madison was ranked third in Kills. MaxPreps has Madison listed as 55th in the entire state in kills, 10th in all of Division II, and second in our conference. For hitting percentage in MaxPreps, Madison is listed as first in our conference and 10th in all of Division II. Madison is approaching 300 kills on the season as well as 500 in her short career.” 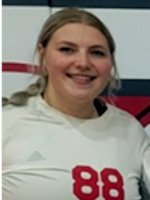 Name: Lilly Rhodes
School: Geneva
Grade: 12
Stats: Recorded 13 kills, two service aces, and three blocks
Coach’s Quote: “Lilly had an outstanding week,” said Geneva coach Annah Haeseler. “She was solid attacking on the backside with 13 kills and 3 blocks; two aces serves on the week. I’m proud of Lilly’s positive attitude and her leadership this past week and this entire season. She works hard and gives her all.”