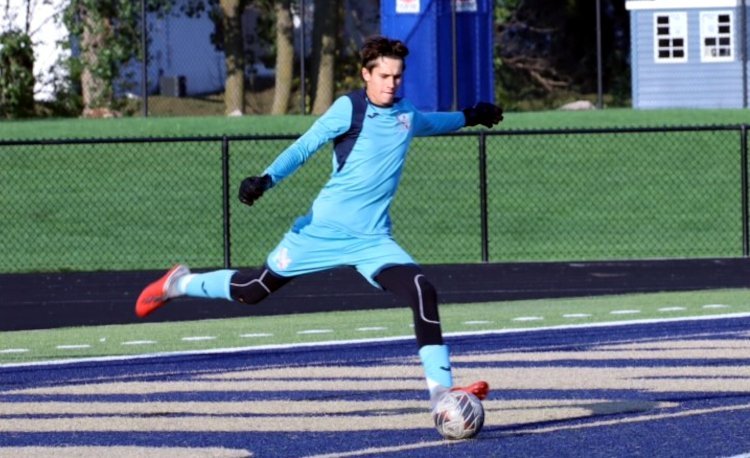 Athletes from 14 different schools have been named the Chagrin Valley Conference Athletes of the Week. 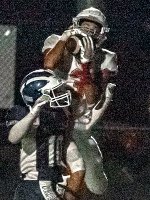 Name: Christian Cunningham
School: Edgewood
Grade: 12
Stats: Caught six passes for 122 yards and two touchdowns, returned a punt 79 yards for a score, recorded six tackles, and forced a fumble
Coach’s Quote: “Christian was all over the field making plays for us,” said Edgewood coach Olajuwon Cooper. “He’s done a great job of being patient and letting the game come to him. He’s a game changer for us in all facets of the game.” 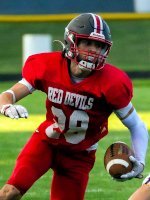 Name: Jonas Honeycutt
School: Crestwood
Grade: 12
Stats: Caught five passes for 162 yards and two touchdowns and on defense, he recorded 14 tackles, including one for a loss
Coach’s Quote: “When we needed him the most, he played his best,” said Crestwood coach Jack D’Amato. “That’s the sign of a great player and leader. Jonas stepped up and made play after play in all three phases of the game. I’m very excited to have him back in the lineup after some time off due to injury.” 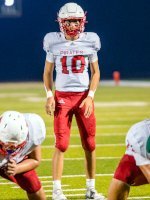 Name: Walter Moses
School: Perry
Grade: 10
Stats: Completed 17-of-23 passes for 228 yards with two touchdowns and two two-point conversions
Coach’s Quote: “Walter is doing a great job running the offense and distributing the ball to multiple teammates,” said Perry coach Bob Gecewich. “He continues to grow and develop each week, taking advantage of the opportunities presented, and working with the upperclassmen to improve our team.” 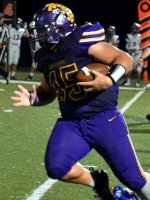 Name: Elijah Southern
School: Berkshire
Grade: 12
Stats: Ran two times for 12 yards with one touchdown, caught four passes for 57 yards with another score, and recorded eight tackles, including two for a loss, one sack, and picked off two passes
Coach’s Quote: “Elijah had a great night on both sides of the ball against Independence on Friday,” said Berkshire coach Josh DeWeese. “He had punishing runs when he had the ball in his hands scoring two touchdowns. Defensively, he played downhill all night. His two interceptions in the second half helped secure the win.” 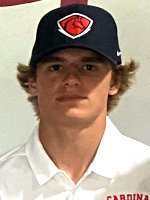 Name: Troy Domen
School: Cardinal
Grade: 11
Stats: Shot a 37 and a 38 to go along with four medalist wins and a second-place finish in five matches
Coach’s Quote: “Troy led the Huskies to a 5-0 record in a busy week,” said Cardinal coach Mike Topalian. “Troy leads the Huskies with a 41 scoring average.” 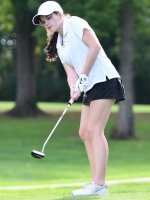 Name: Emma O’Brien
School: Chagrin Falls
Grade: 11
Stats: Shot a 46 in a dual match against Laurel
Coach’s Quote: “Emma is consistent and reliable with scores trending in the right direction as we approach the postseason,” said Chagrin Falls coach Kristin Reboul. “Her good nature, hard work, and resilience make Emma a phenomenal teammate and a pleasure to coach.” 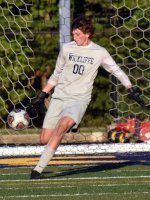 Name: Anthony Shaw
School: Wickliffe
Grade: 11
Stats: Recorded 11 saves while not allowing a goal
Coach’s Quote: “Anthony was a huge part in a strong week for us as we beat Independence 2-0 and Madison 4-0,” said Wickliffe coach Dom Severino. “With two strong teams, you need a goalie to make big saves in key moments, and he did just that.” 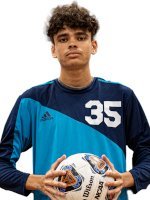 Name: Evan King
School: Lutheran West
Grade: 10
Stats: Recorded 42 saves in three matches including an unofficial single-game school record of 21 in a 2-1 win over Gilmour Academy
Coach’s Quote: “Evan has been a huge part of our success this season so far,” said Lutheran West coach Joe Jovanovski. “He matures every day as a player and has 42 saves on the week he also has two shutouts on the season and has a current 1.13 goals allowed average on the season.” 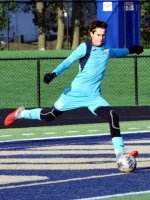 Name: Zoltan Kotrebai
School: Hawken
Grade: 11
Stats: Allowed two goals in two games
Coach’s Quote: “Zoltan had two assured performances in goal for the Hawks,” said Hawken coach Vlad Muresan. “Winning against West Geauga, Zoltan made all the saves he needed to make, only conceding a last-minute penalty kick. He was very good versus Toledo St John’s Jesuit as well, allowing only one goal vs a very talented Division I team.” 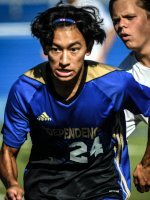 Name: Matt Wisniewski
School: Independence
Grade: 11
Stats: Scored two goals from his defensive position
Coach’s Quote: “Matt Wisniewski is a selfless defender who takes great pride in his role,” said Independence coach Brien McDonald. “Over our last several games, Matt marked some of the best goal scorers in the Cleveland area and did a fantastic job. Along the way, he scored not one, but two goals–the first two goals of his high school career–to help us on the offensive side. His smile said it all. I am very proud of Matt’s consistent effort.” 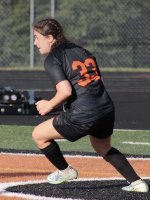 Name: Emma Berlin
School: Orange
Grade: 12
Stats: Scored five goals with three assists, contributing to eight of nine goals scored
Coach’s Quote: “Emma is truly a student of this game with a very high soccer IQ,” said Orange assistant coach Jo Bondra. “She is always looking for ways to help her team get into a position to win. When we are not in the offensive third she is also holding down the middle of the field as she defends, has great vision of the field, and distributes the ball very well.” 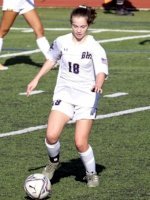 Name: Kelly McCandless
School: Berkshire
Grade: 9
Stats: Scored three goals with five assists
Coach’s Quote: “Kelly has now scored 7 times this year and assisted another 14 times,” said Berkshire coach Ian Patterson. “Our squad is primarily compromised of upperclassmen that have a lot of experience playing high school soccer; however, Kelly has come in and carved out an important role with this squad as a freshman. She continues to impress us every day with her foot skills and ability to execute passes in the midfield.” 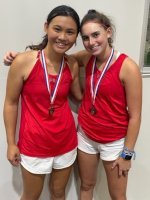 Name: Hayley Garber and Eliana Yang
School: Hawken
Grade: 11/12
Stats: Finished the week 3-0 in doubles pay
Coach’s Quote: “Hayley and Eliana pulled out three wins last week playing first doubles for the Hawks against Perry, Avon, and Columbus Academy,” said Hawken coach Brian Smallwood. “They really came together as a team this past week and pulled out a tough three-set match against Columbus Academy on Saturday. It was great to see them problem solve in a tight match.” 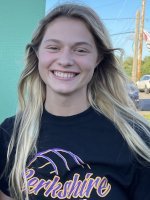 Name: Sierra Berman
School: Berkshire
Grade: 12
Stats: Recorded 33 digs, 26 kills, 21 service points, six aces in leading the team to a 4-0 record and tournament title at the Berkshire Invitational
Coach’s Quote: “Sierra has been our most consistent passer with a season average over 2.0,” said Berkshire coach Joni Prots. “Our offense runs with good passes and Sierra makes that happen. She leads the team in digs and has great instincts on defense. Sierra is also one of our top weapons on offense. She is so smart on the court, sees the floor so well, and is able to score in many different ways for us.” 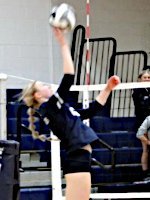 Name: Kaitlyn Danszczak
School: West Geauga
Grade: 12
Stats: Recorded 27 kills, 19 digs, and nine service aces in two matches
Coach’s Quote: “Kaitlyn is the captain of our team and she takes that role very seriously,” said West Geauga coach Amber Baker. “She leads by example and expects the very best of herself at all times, and that energy helps our whole team fight harder. In the five-set thriller against Trinity, Kaitlyn had 19 kills, pushing her past her 500th career kill goal. In our three-set match against Orange, Kaitlyn showed her range with eight kills and seven aces. We are all so proud of Kaitlyn, everyone believes in her so much, and we can’t wait to see what Kaitlyn accomplishes at the next level.” 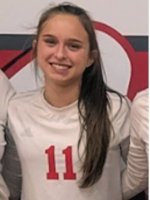 Name: Gianna DeLuca
School: Geneva
Grade: 12
Stats: Recorded 15 kills and nine service aces
Coach’s Quote: “Gianna had a great week,” said Geneva coach Annah Haeseler. “She is getting her swing and timing down and really making an impact in our offense. She is a fierce, intense player with a quiet confidence. She is a stat leader in almost every category. I’m looking forward to an intense, successful and busy second half to our season with G leading the way.” 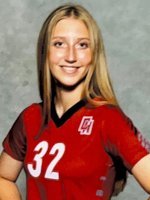 Name: Paige Henley
School: Cuyahoga Heights
Grade: 10
Stats: Recorded 22 kills, six assists, and four aces in two matches
Coach’s Quote: “Paige totally dominated in our matches last week,” said Cuyahoga Heights coach Kelsey Mason. “She was a key contributor in pushing us to five sets against Trinity with her aggressive serves and strong play on the outside. Against St. Martin De Porres, she really found her stride at the net and became totally unstoppable. Oftentimes, a kill from Paige is the momentum boost our team needs to get through the next few points. Her volleyball IQ continues to improve each match and she has been a fun player to watch develop over the season.” 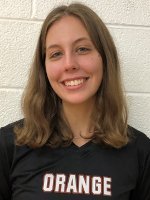 Name: Payton Katz
School: Orange
Grade: 12
Stats: Recorded 15 kills, 13 digs, 10 assists, four service aces, one block, and posted a 77.8-percent serve percentage and a .367 hitting percentage
Coach’s Quote: “Payton is an all-around player and is setting the right tone for the team,” said Orange coach Jen Gold. “She plays aggressively each night and her leadership is something our team cannot do without.”