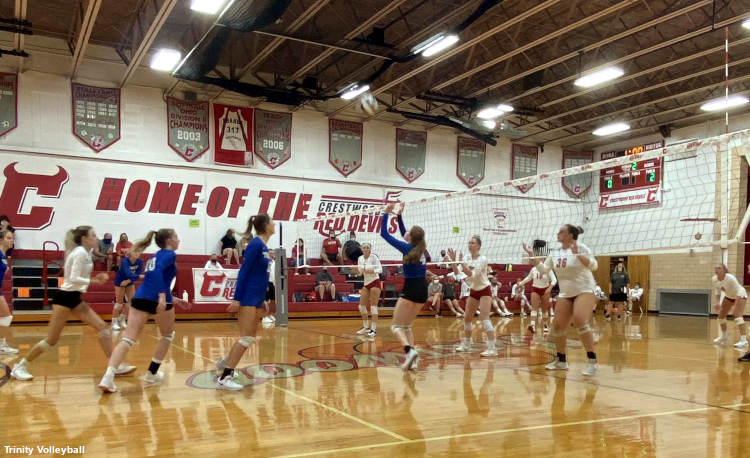 Tuesday kicked off the first big night of sports action in the Chagrin Valley Conference with most teams playing in multiple sporting events.

Here’s a look at some of the final scores and highlights.

Cardinal 181, Windham DNS
Cardinal picked up a win over Windham. Seth Hill, Connor Callison and Troy Domen each shot 45 and CJ List added a 46 for the Huskies.

Independence 164, Lutheran West 174
In a battle of the CVC’s top teams, record scores were recorded and this match between previously undefeated squads lived up to its billing.

Lutheran West’s Sam Webb shot a 3-under 32, which tied the school record she shot in 2018. It wasn’t enough though as Independence had sub-40 scores from Morgan Pascarella (38) and Allie Ksiazka (39) to offset Webb’s incredible round.

The two league rivals will square off again at Lutheran West’s home course of Red Tail Golf Course on Sept. 10.

Grand Valley 9, Leetonia 0
Calli Hodge scored three goals to lead the Mustangs to a 9-0 win at Leetonia on Tuesday.

Wickliffe 2, North 1
Eliza Wills scored both of Wickliffe’s goals and Morgan Gabriel added an assist in the Blue Devils’ nonconference win over the Rangers. Kaylee Lauriel recorded 11 saves in goal.

Berkshire 5, Garfield 1
Allie Barcikoski notched a hat-trick and Brooke Ruchalski and Madison Durosko also scored for the Badgers in their road win. Summer Larch assisted on two goals while Barcikoski, Marissa Tiber and Ruchalski each recorded one assists. Sarah Wendl finished with four saves in the net.

Pymatuning Valley 2, Cardinal 0
Pymatuning Valley’s depth proved to be the difference as the Lakers scored both of their goals in the final 10 minutes of play against Cardinal, who had just 11 players.

Grand Valley gave Lutheran West all it could handle until the Longhorns tightened up on defense and serve receive thanks to the efforts of Sarah McLesson and Makayla Spelich. Hope Kiraly, Lauren Kucharski, Arryon Esposito and Ellie Bell were solid at the net in blocking and attacking.

Kaitlynn Minarik and Morgan Stoltz each scored nine points for the Eagles.

Mollee Chapman recorded a team-high 16 kills to go along with 14 assists, 10 digs and nine service points in leading the Badgers to the sweep. Delaney Tucek added 15 points, 20 digs and six aces and Maddy Triskett finished with 17 assists, 13 digs and four points. Lauren Lappert contributed with nine kills and Maddie Smetana pitched in with four kills, three digs and two points.