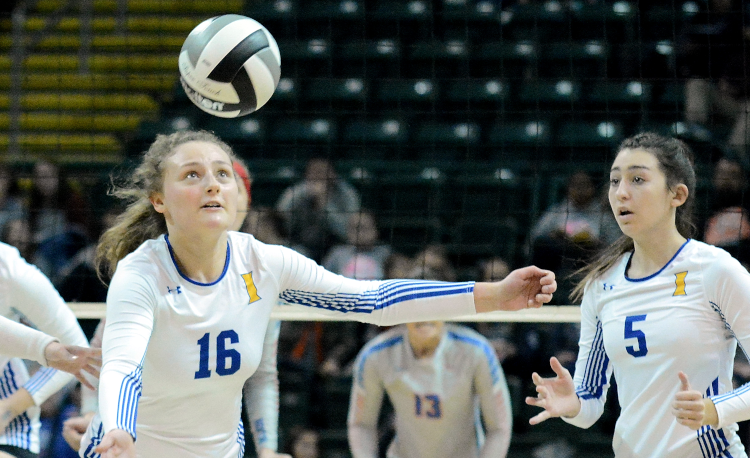 With a 3-1 win over visiting Trinity on Thursday, Independence extended its conference winning streak to 98 straight matches.

But, by winning a set against the Blue Devils, Trinity snapped Independence’s streak of 53 straight sweeps against conference foes.

“It was very exciting to win against such a competitive team tonight,” said senior Grace Smotek, one of two Independence seniors honored before the match. “We had not seen much competition in our first two matches, so this really gave us a good look at where we are at right now.”

Smotek and senior Madison Stepanik have yet to lose a conference match.

In fact, until Thursday, they hadn’t lost a set to a conference opponent.

“I have never dropped a set in conference play during my time here so that was really something in the back of my mind as we lost the second set,” Smotek said. “I knew I needed to pull the team together and regroup fast after that loss and we did that going into the third. The discussion in the huddle focused on getting out first ball because we struggled with that in the second set.”

The last time Independence had lost a set to a Chagrin Valley Conference opponent was in a 3-2 win over Chagrin Falls on Sept. 8, 2016.

Even having their streak of conference sweeps snapped, the Independence seniors enjoyed every moment of Senior Night.

“It was such an exciting night, playing a competitive team and coming on top was definitely icing on the cake,” Stepanik said. “I’m just trying to make the most of every moment during my senior year. I’m super excited to see where this season takes us.”

Stepanik, who on Saturday was named Homecoming Queen, has had quite the week.

“I’m so fortunate that our community has given us these opportunities with everything going on,” she said.

Smotek, a four-year starter, and Stepanik have been part of three runs to the state Final Four.

The Blue Devils first played in Dayton back in 2017 and then in each of the past two seasons the team has finished as the Division III state runner-up.

And, now, with time winding down in their high school careers, it’s becoming harder and harder to keep the emotions in check.

“It can get very emotional at times knowing that this is my last season as a Blue Devil, but I just appreciate every moment I get with this team especially under the circumstances we are dealing with right now,” Smotek said. “This was not how I pictured my senior season but I am not going to let it get in the way of our ultimate goal we have for this team.”