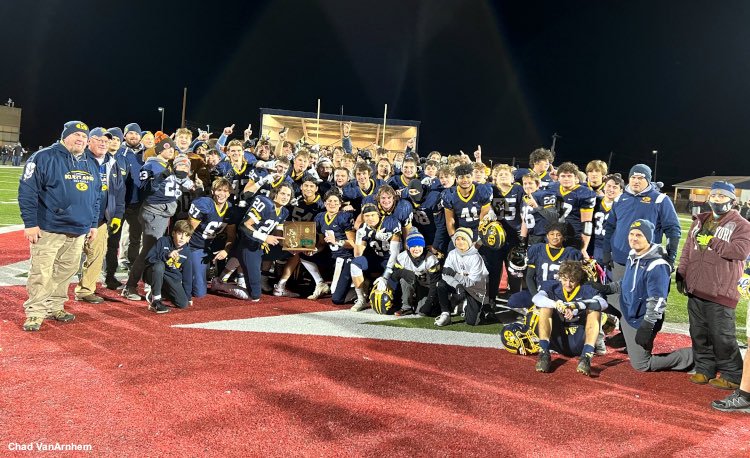 Will Sayle opened the game with a pick-six and the Hornets controlled the clock for the rest of their 38-15 win over Canfield South Range in a Division V, Region 17 championship game on Saturday.

With the win, the Hornets improved to 13-0 and claimed their fifth straight regional title. Kirtland will play in its 10th state Final Four in the past 11 seasons.

“It feels great to get a dominant win against such a good team,” said Kirtland quarterback Ramon Lescano. “We watched film and prepared for South Range all season and we came out with a deserving win.”

Sayle stole the momentum early when he picked off a screen pass and returned it 42 yards for a touchdown on the second play of the game.

The Raiders responded with an eight-play, 60-yard drive capped by a 16-yard touchdown pass from Billy Skripac to Conner Jones that tied the score at 7-7 with 7:22 remaining in the first quarter.

Following a South Range punt, Tommy Gogolin broke a 64-yard touchdown run with 8:43 left in the first half that pushed Kirtland’s lead to 21-7.

The Hornets moved into the red zone late in the second quarter but a lost fumble thwarted that drive.

Kirtland opened the second half with a 16-play, 65-yard scoring drive capped by a one-yard dive from Mason Rus. The drive chewed up over nine minutes of game clock.

“After a good first half, we were able to run our staple plays and keep churning the clock and get first downs,” Lescano said. “Not only is it nice for the offense, but South Range’s offense basically took a break for the halftime break and a quarter which helps our defense.”

Johnny Raguz added a 31-yard field goal in the fourth quarter to push the lead to 31-7.

Skripac kept South Range’s hopes alive with a 37-yard touchdown run with 4:38 remaining in the game but the Hornets responded once again with a 17-yard touchdown pass from Lescano to Gage Sullivan to seal their 54th straight win.

Lescano completed 4-of-5 passes for 69 yards and the one touchdown. He also ran for 93 yards on 15 carries.

Rus led all ball carriers with 117 yards on 30 carries with the two scores. Gogolin finished with 90 yards on just six carries and he also picked off a pass in the game.

Kirtland’s run of 54 straight wins is tied for the second-most in OHSAA history and is currently the nation’s longest active winning streak.

The Hornets will play Ottawa-Glandorf, a 31-6 winner over Elyria Catholic, in Saturday’s state semifinals.

“To win next week, we need to come in Monday and watch film, analyze the other team’s offense, and have a great week of practice,” Lescano said.

West Geauga dominates inside game in win at Madison

West Geauga dominates inside game in win at Madison

West Geauga’s inside game paved the way for a 59-51 nonconference win at Madison on Friday afternoon.

With three returning starters, Independence opens the 2021-2022 season with the hopes of winning its first conference title in 39 years.

West Geauga hopes to bounce back from the one-win season it endured last winter. To do that, the Wolverines have to grow up in a hurry.

Cardinal returns four starters but three are juniors and one is a sophomore, leaving the Huskies relatively young as they open the season.
Load more