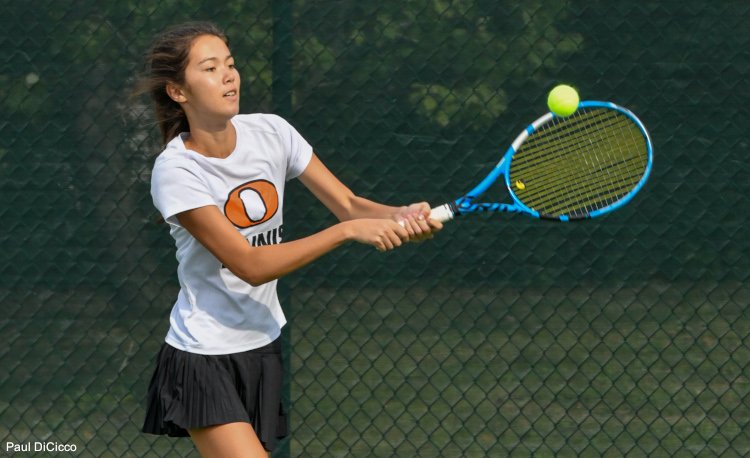 Orange junior Alex Nyborg steamrolled her way into the Division II state championship match last weekend but settled for second place after a loss to the defending state champion.

Nyborg placed fourth at the state tournament in 2020.

“It was a good experience,” Nyborg said of her run to the state finals. “It was nice improving from last year, so that was good.”

Nyborg opened the state tournament with a 6-0, 6-0 win over Lima Central Catholic’s Libby Simmons and then beat Cincinnati Indian Hill’s Brooke Arrington, 4-6, 7-6, 6-0, in the quarterfinals.

“I was pretty confident with my first match,” Nyborg said. “The second one, I saw her record and she had a pretty good record and was going three sets with really good people, so I was a little nervous for that one.”

After beating Lampman, Nyborg had another loss she hoped to avenge in the state finals.

Eaton’s Macy Hitchcock defeated Nyborg in the 2020 state semifinals, 6-3, 6-0, and the two had met several other times in tournaments.

Nyborg had beaten Hitchcock just once in their previous meetings.

“I was glad I made it to the state finals,” Nyborg said. “I knew Macy was a really good player and I had nothing to lose. I kind of knew her game and knew she was really consistent and she hits everything back.”

Hitchcock cruised to a 6-1, 6-2 win over Nyborg to claim her second straight state title.

Nyborg settled for state runner-up honors in her third trip to the state tournament. She qualified as a freshman but did not place and last fall, she finished fourth.

With one year of high school tennis left, Nyborg has her eyes on a repeat trip to the state tournament as a senior.

“I’d like to do as well as I did this year,” she said. “I would be happy to make the semifinals and place, and try to win it, but I don’t know, that’s a tall order.”