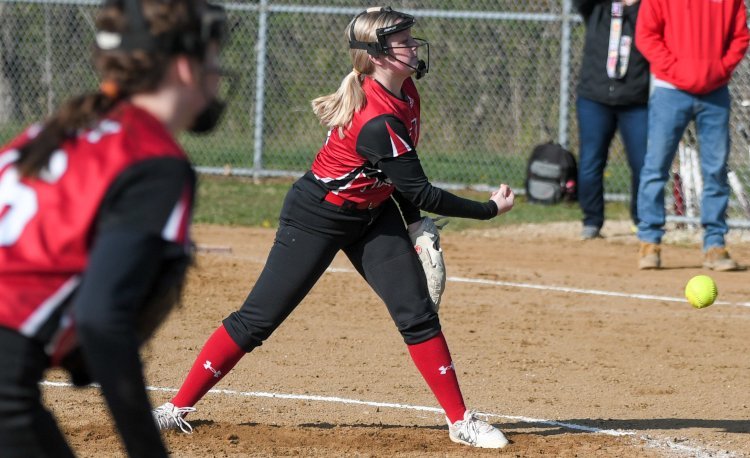 The Pirates scored one run in the bottom of the first and four in both the fourth and sixth innings to extend their league winning streak to 76 straight games.

“It was a great game,” said Perry coach Joe Medlen. “Geneva and the league is starting to get a little better. Geneva is right there. They were really good and played tough defense. They were hitting the ball too but then they made a couple of errors and things fell apart a little bit, but they were a solid team.”

Geneva hit back-to-back singles to lead off the game but Faith Hartman locked in and closed out the inning without allowing a run.

The Pirates then scratched across one run in the bottom half of the inning.

Madeline Infalvi hit a leadoff single and stole second and third. She scored on a passed ball.

The Eagles put two runners on base again in the second but Hartman wouldn’t be denied her fourth straight conference title.

“I have been blessed with amazing girls who have played alongside me through my four years on this team. It is huge to continue the winning streak that was created before me,” she said. “It’s not very common to see a team win so many times in a row. I’m so honored to be a part of it. I am so proud of every girl who is on this team. They help carry on the legacy that me and along with other girls were left with.”

Geneva scored its run in the top of the fourth when Daliz Alvarez drew a leadoff walk and scored on Jordyn Alderman’s RBI single.

The Pirates responded with four runs in the bottom half of the inning.

Elise Strahan hit a leadoff single, Gigi Vicini drew a walk, and Lily Agostine drew a one-out walk to load the bases. Rosalyn Tharp followed with a two-run single and Hailey Hodge later hit a two-run double to push the Perry lead to 5-1.

Agostine and Tharp hit back-to-back singles to start the inning and both scored on Emma Pieterzak’s triple. Hodge followed with an RBI single and she moved to third on Sydney Collins’ single. Hodge scored on Strahan’s ground out.

“Our girls were ready and the seniors were really ready,” Medlen said. “They wanted to close this deal. Faith went the distance today and after she settled in she was really solid. She kept their hitters off balance and their top three or four were really pretty good.”

Strahan, Tharp, and Hodge each finished with two hits and Pietrzak posted a team-high three RBI.

Hartman allowed one earned run on six hits and fanned five in the win.

“I can’t say enough about our offense,” Hartman said. “The young ladies truly put in so much time and energy to produce at the plate and I am so happy to see Emma getting back into it. Her triple that she had really allowed me, along with other girls, to settle in and take a few deep breaths because our offense was coming alive.”