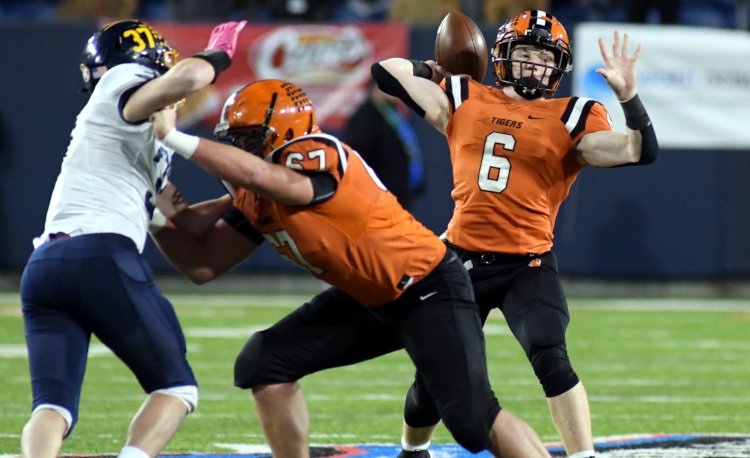 CANTON—Versailles denied Kirtland’s seniors the chance to complete their careers with a fourth straight state championship.

The Tigers stole a page out of Kirtland’s playbook and dominated time of possession, were stingy on defense, and used a balanced offense to defeat the Hornets in the Division V state championship game at Tom Benson Hall of Fame Stadium on Saturday, 20-16.

“If anyone thinks this season is a disappointment, they’re crazy,” said Kirtland coach Tiger LaVerde. “Things didn’t go our way today. Give credit to Versailles, they’re a great football team.”

The Tigers opened the game with a 10-play, a 63-yard scoring drive that chewed up over five minutes of offense.

Despite the blocked extra point, Versailles became the first team to hold a lead against the Hornets since the first round of the 2019 playoffs.

Kirtland responded with a Johnny Raguz 38-yard field goal but the Tigers reeled off 14 straight points to take a 20-3 lead midway through the third quarter.

Versailles scored on touchdown drives of 65 and 80 yards with each spanning 10 and 13 plays, respectively.

“They’re big up front,” LaVerde said. “They’ve got a great scheme and (Versailles quarterback Carson Bey) is tough to tackle one-on-one. They block you and stay on you. All year, our defensive line has been little and quick. Today it caught up to us a little bit.”

A 29-yard Gage Sullivan touchdown with 9:03 left in the game pulled the Hornets to within 20-10 but the Hornets threw an interception and turned the ball over on downs on their next two possessions.

Mason Rus closed out the scoring with a four-yard touchdown with 37 seconds left in the game.

Versailles recovered the onside kick attempt and ran out the clock to seal their win.

“I think we competed hard until the end,” LaVerde said. “It just didn’t happen for us today. That is a good football team and they deserved to win the game. I love these kids and I don’t want these kids to think that they weren’t successful because this was a very successful season.”

Kirtland’s seniors closed out their careers with a 55-1 record, three state titles, and one state runner-up finish.

Despite their struggles early in the game, Kirtland matched Versailles with 263 total yards from scrimmage.

The Hornets, however, were just 1-for-8 on third down while Versailles was 6-for-12. The Tigers, though, recorded four takeaways to just one for the Hornets.

The streak-snapping victory was a bit of revenge for the Tigers, who won 54 straight games from 1993-1997. Kirtland’s state semifinal win pushed the Hornets to 55 straight wins.

“That’s exactly what we had in mind all week,” Bey said. “We knew they beat our record, that they had 55 straight. There were signs all over town, ’55 and 1.’ We knew we could make it happen.”