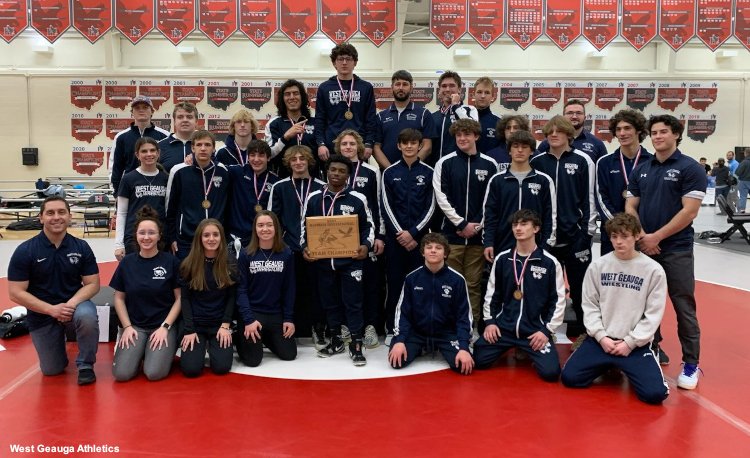 West Geauga opened the season with a convincing team win at the Hawken Invitational Tournament on Saturday.

The Wolverines won four individual championships and placed seven others among the top six to finish with 202 ½ points. Willoughby South was second with 151 ½ and Independence placed third with 150.

“I think most coaches would be excited with a top 10 finish, but to finish first out of 17 teams, it’s very rewarding,” said West Geauga coach Carmen Russo. “All weekend as it was kind of building up, I was telling the guys not to focus on the team score and just focus on what you need to do each and every round. I told them the team score will work itself out but you could tell they were getting excited.”

Ethan Bartlett and Nick Donofrio placed third and fourth, respectively, at 157, Matthew Obranovich was fourth at 120, and Evan Baughner placed fifth at 113.

Randau’s performance was especially impressive considering he lost a wrestle off to Dan Donofrio and was considered a non-scoring member of the team at 132 pounds.

He won by technical fall in the first round and then pinned his next two opponents to reach the championship match.

“He lost his wrestle-off, but he’s one of my captains,” Russo said. “After that, I told him he just has to get back to the grind and just keep working and it paid off for him. His points didn’t count for us as a team because Dan was the starter but Tom beat some wrestlers and prevented them from getting points for their teams. Tom did a tremendous job. He didn’t win his wrestle-off but he came back and that just goes to show you that he’s listening to his coaches and staying on track and he still has a chance to get his spot back.”

The Wolverines, who finished the tournament tied for fourth with 16 pins as a team, have some bigger goals in mind for this season and this win is one big step toward achieving those goals.

“We won first place and that’s great, but I told the guys to enjoy today and tomorrow but come Monday, we’ve got work to do,” Russo said. “We have a bigger goal in mind that we want to achieve. We want to become the first team in school history to qualify for team states, that’s our ultimate goal. This is a stepping stone to achieving that goal.”