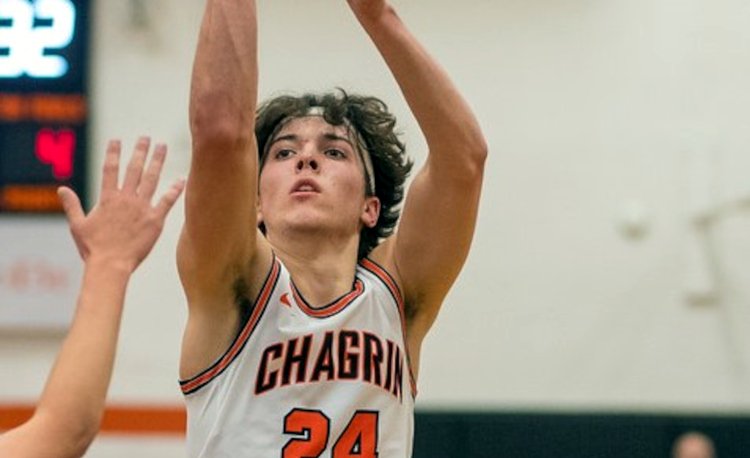 Chagrin Falls bounced back from Tuesday’s loss to Beachwood with a 58-43 win over visiting Edgewood on Friday.

The Tigers played a complete game in improving to 9-4 on the season.

“We played outstanding basketball tonight on both ends of the floor,” said Chagrin Falls coach Dave Bargar. “We had a good rhythm on offense, getting out in transition and executing our half-court offense very well. Defensively, our guys did a great job of locking down some of their big scorers and made them work for everything they got tonight. We needed to bounce back after our loss to Beachwood on Tuesday. The second half of the season in our league is extremely difficult and we did a good job tonight getting some momentum back.”

Chagrin Falls jumped out to a 23-11 first-quarter lead but Edgewood pulled to within four in the second quarter.

That’s when the Tigers hit their stride.

With three minutes remaining in the first half, Chagrin Falls scored the final eight points of the half and then outscored the Warriors in the third, 20-9.

“We had a little lull in the second quarter on offense, which allowed Edgewood to pull within four,” Bargar said. “We always talk about controlling the end of quarters and the last three minutes of the second we were able to go on an 8-0 run to get some breathing room.”

James Kosmides returned from an injury to lead the Tigers with a triple-double. He scored 14 points with 10 rebounds, 11 blocks, and three assists.

Ryan Curtiss posted a double-double with a team-high 16 points and 11 rebounds, and Max Crandall contributed to the win with 10 points, three assists, four steals, and five rebounds.

“Having James back tonight was a huge lift,” Bargar said. “Not having him against Beachwood hurt our interior defense, but tonight he controlled the lane with 11 blocks.”

Leading by two at the end of the first overtime, the Red Wolves committed a foul on Owen Mueller’s 3-point try at the buzzer. Mueller hit two-of-three free throws to force the second OT. Cuyahoga Heights outscored Kirtland, 8-0, during that period to seal their 14th straight win. Cade Davies led the Red Wolves with 13 points.

Leading 42-40 heading into the fourth quarter, the Eagles pulled away from the Lions down the stretch. Geneva converted on 11-of-14 free throw tries down the stretch to seal its win. Luke Smith, Luke Barbo, and Hayden Diemer each scored in double figures for the Eagles with 22, 13, and 12 points, respectively. Orange’s Devin Belle led all scorers with 32 points.

A fast start and strong finish led Grand Valley to a come-from-behind win at Independence on Friday. The Mustangs led 22-17 after the first quarter but trailed at halftime, 36-32. Four players scored in double figures for the Mustangs including Jerry Schultz, who scored a team-high 25 points. Nate Boiarski added 18, Landon Spencer scored 14, and Logan Zirzow finished with 10 points. Sam Crooks led Independence with a game-high 27 points while Landon Jatsek also scored in double figures with 17.

Five players reached double figures in Richmond Heights’ win over Harvey on Friday. Dorian Jones led the charge with 21 points while Braylen Salters and DeErick Barber both scored 17. Demaris Winters pitched in with 16 and Jeremy Wilson contributed to the win with 13. Armani Hall and Jacob Konya both scored in double figures for Harvey with 21 and 15 points, respectively.