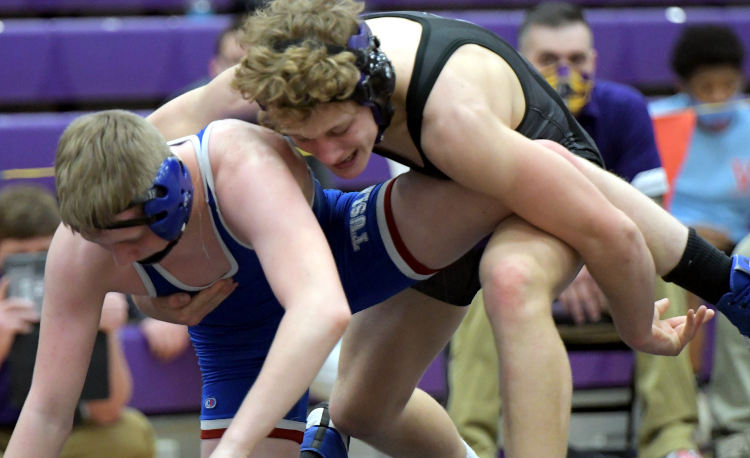 Friday was a big day for over a dozen Chagrin Valley Conference wrestlers who reached the semifinals at their respective district tournaments and now need just one more win to earn a berth in next weekend’s state championships.

Perry had the most success as four Pirates won both of their preliminary matches at the Division II Perry District on Friday. The Pirates are in third place as a team with 58.5 points. Louisville leads with 94.5 and Lake Catholic is in second with 67.5

Junior 106-pounder Zach Bellissimo won his matches on Friday with a technical fall and pin and is now 25-4 on the year. He’ll wrestle Louisville’s Dylan Rhoads (26-7) in the semifinals. Sophomore Brock Christian, who improved to 29-3, advanced to the 120-pound semis with two pins. He’ll match up with Lake Catholic’s Brendan McCrone (37-2) for the chance to wrestle in the championship bout. Senior Colin Koenig (24-1) pinned both of his first two opponents in three minutes flat and will wrestle Norton’s Jayden Morr (32-1) in the semifinals. Ethan Hicks also will wrestle in the semifinals after he won his first two matches, 7-2 and 14-2. Hicks (22-5) will wrestle Max Kirby (24-3) of Fairless in the 152-pound semifinals.

Sparent (22-1) won by major decision and a pin to set up a showdown with 32-0 Garrett Lautzenheiser of Louisville in the 126-pound semis. Sicker improved to 18-3 after a pin and major decision in the 138-pound preliminary rounds. He’ll wrestle Louisville’s Davin Rhoads (20-2) in the semifinals. Selman remained undefeated at 32-0 with a pair of pins. He’ll wrestle Lake Catholic’s Rob Boley (35-4) in the 160-pound semifinals.

Jackson improved to 31-1 with a pin and decision in the 170-pound preliminary rounds. Jackson will face Salem’s Caiden Hart (34-1) in the semifinals.

The Garfield Heights Division III district semifinals will see eight CVC wrestlers competing for a district championship and state berth while Berkshire is competing for the team title. The Badgers currently sit in sixth place.

Hawken junior Patrick Reineke advanced to the 113-pound semifinals with a pin and a 9-2 decision. He’ll wrestle Northwestern’s Trent Sigler (24-1) in the semifinals.

It will be an all-CVC matchup at 120 pounds as Crestwood freshman J.P. Wrobel will wrestle Kirtland junior Will Davidson in one of the weight classes two semifinals. Wrobel improved to 32-1 with a pair of pins while Davidson is now 23-3 after a pin and a 9-6 decision.

Lutheran West senior Donovan Palmer opened the district tournament with a pair of pins at 160 pounds. Palmer, who improved to 39-1, will wrestle Jefferson’s Colt Edgar (35-5) in the semis.

A pair of CVC wrestlers are on a crash course to meet in the district championship at 182 pounds.

Rose, who improved to 31-10, collected a pin and a 7-5 decision and will wrestle Northwestern’s Hal Huber (19-4) in the semis. With a pin and a major decision, Stoddard remained undefeated at 43-0. He’ll put his perfect mark on the line in the semifinal round against Dalton’s Eric Miller (33-3).

Kirtland junior Anthony Gencarelli opened the tournament with a pin and then won a 3-0 decision in the quarterfinals. Now 25-2, Gencarelli will wrestle Southeast’s Jaidyn Sapp (30-4) in the semifinals.

The CVC has 52 other wrestlers still alive in the consolation brackets with 16 of those wrestlers competing head-to-head to keep alive their state tournament dreams.

Below is a division by division at those wrestlers.

Lakeside’s Ethan Wannett opened the tournament with a win but defaulted in the quarterfinals and is scheduled to wrestle Massillon Perry’s Jason Waller in a 138-pound consolation bout.

Orange’s Te’Andre Allen won his first match then lost a close 2-1 decision in the quarterfinals. He bounced back with a 6-0 win and will wrestle Clyde’s Chris Oleksiak in the consolation quarterfinals.

Chagrin Falls junior 152-pound Sam Partain dropped his tournament opener but rebounded with a major decision and another win to set up a consolation quarterfinals bout with Celina’s Jaden King.

West Geauga’s Ty Boze and Edgewood’s Joey Jafarace both remain in the hunt at 106 pounds. After dropping their first-round bouts, Boze won 10-4 and will wrestle West Branch’s Tyler Hicks while Jafarace won his first consolation bout, 3-2, and will meet up with Canfield’s Ty Stricko.

Biller will wrestle Ciolli in one of those key CVC head-to-head matches while Berdysz and Rowdy and Smith and Mirabelli will face off in two others.

Berkshire’s hopes for a team title are dependent on the eight Badgers in the consolation bracket collecting some valuable team and placement points.

Rennecker and Kattler will face off in a CVC head-to-head bout.

Jason Baxter and Dan Cosimi contributed to this story