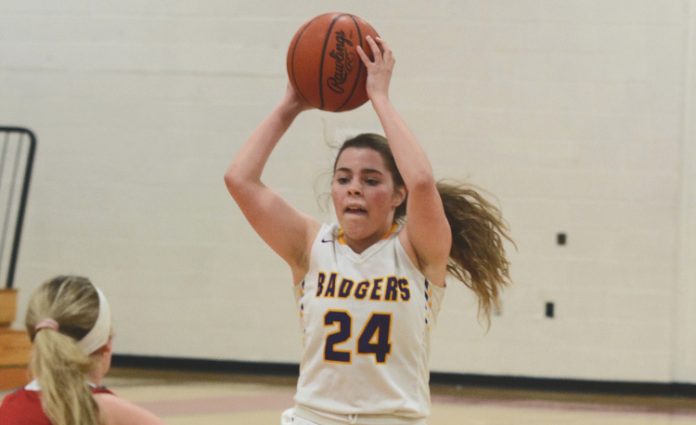 Berkshire allowed just one point in the fourth quarter as the Badgers rallied to beat host Chalker on Saturday, 38-33.

The Wildcats used a buzzer-beating 3-pointer to take a 32-31 lead into the fourth quarter but Berkshire rose to the challenge and outscored Chalker in the final eight minutes, 7-1.

“That gave them all the momentum going into the fourth, but I think it woke us up a little bit defensively because we only allowed one point in the fourth,” said Berkshire coach James Bosley.

That wasn’t the only adversity the Badgers faced during the game.

Starter Kylie Neumore left the game early with an injury, which forced several other Badgers to step up to fill her shoes.

“Losing Kylie put us out of sync but it also gave some girls the chance to step up and make some plays,” Bosley said. “The game was a struggle just trying to get anything going but it was nice to see so many girls trying to step up.”

Lanie Wadsworth followed up an outstanding performance at Hawken on Monday with nine rebounds and clutch defense. Caroline Kuchling contributed with three steals and a stingy defensive effort. Brooke Ruchalski, Kaylee Polewchak and Natalie Hering also saw extended minutes and provided the Badgers with a spark.

Lydia Kastor did most of the damage for the Badgers on offense. She scored a game-high 17 points and also pulled down 12 rebounds with three assists.

“She really shouldered the offensive load for us,” Bosley said. “She was 8-of-15 shooting on the day and grabbed 12 rebounds, which is the most I’ve ever seen her get in a game. She also settled things down offensively and within our overall shooting struggles, we held the ball a lot longer per possession than we normally do.”

Maddy Triskett added nine points with two blocks and was 5-for-7 from the free throw line. Mollee Chapman pitched in with five points and seven rebounds.

“Maddy Triskett continued to be a mismatch for people on offense. She’s able to play inside and outside. In a physical game, it also helps she’s able to get to the free throw line,” Bosley said. “Mollee Chapman showed her senior leadership late in the game by just making sure the younger girls were in the right spots on defense and she did an excellent job of boxing out and keeping Chalker’s post from getting offensive rebounds.”