Badgers rally for win over Spartans 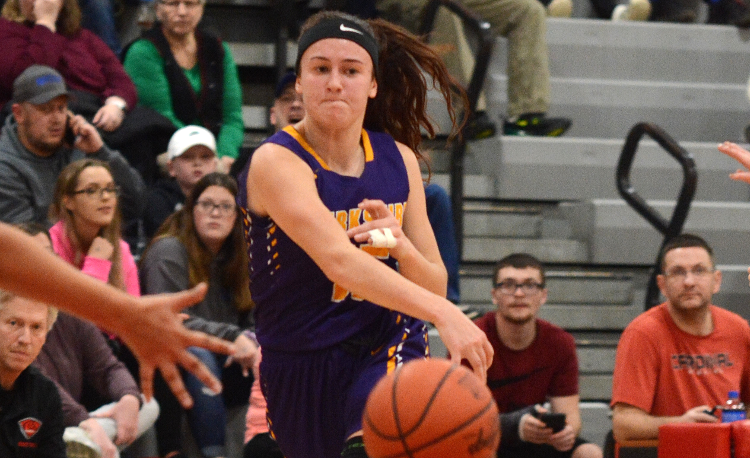 Madison Chapman scored nine of her team-high 17 points in the fourth quarter to lead Berkshire to a 44-40 come from behind win over visiting Richmond Heights on Saturday.

The Badgers outscored the Spartans in the final eight minutes, 19-9.

“Madison Chapman had a huge fourth quarter, “Berkshire coach James Bosley said. “We were down by seven with six minutes to play. She really helped control the rebounds late in the game and running the floor in transition was able to make some strong moves to the hoop and drew some fouls.”

Berkshire opened the game pushing the pace and controlling the tempo.

Behind 25 points from Tamia Farris and eight from Imani Hendon, the Spartans pushed their lead to 31-25 after three.

“We got behind in the third quarter but we never quit playing hard on the defensive end,” Bosley said. “I have to give credit to Imani Hendon. She did a great job handling our pressure for most of the game. Lexi Boyk, Courtney Czekaj, Kylie Neumore, and Lydia Kastor were all over her. I think by the middle of the fourth quarter the pace started to slow her down a little bit. Once that happened, we were able to get a good run late in the fourth.”

Farris found herself in foul trouble in the second half, which opened the door for the Badgers to make their run.

Lexi Boyk, who finished with eight points, two assists, three steals, and four rebounds, hit a pair of free throws to pull the Badgers to within 40-39.

A Richmond Heights technical foul sent Lydia Kastor to the line. She sank both to give the Badgers a 41-40 lead with 22 seconds left in the game.

Chapman added a free throw and Boyk hit a pair to close out the scoring.

“These girls are starting to really buy into the system and are embracing the team concept more and more,” Bosley said. “There was no JV game today and with some foul trouble, a couple girls got put in when normally they wouldn’t have had that opportunity. Georgia Lillibridge and Kaylee Polewchak both got the chance and made the most of it. Seeing those girls get a chance and the reaction of the girls on the bench supporting them shows we are moving in the right direction as a program.”

Kastor contributed to the win with eight points while Kayla Dingman finished with three. Lillibridge and Polewchak both scored two points for the Badgers.