Berkshire, Cardinal square off in 87 Rumble 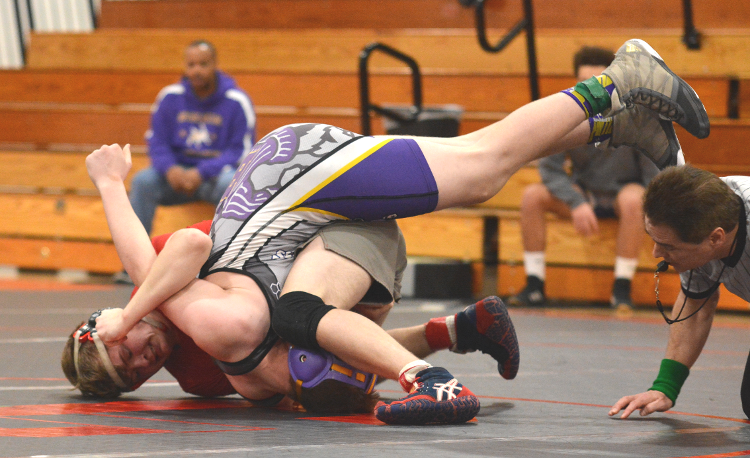 MIDDLEFIELD—Newbury won the 2019 87 Rumble with wins over both Berkshire and Cardinal but the Badgers and Huskies didn’t go down without a fight.

“Overall, I’m real pleased with the guys,” Berkshire coach Adam Lange said. “Last year, I was not pleased with how we wrestled. We didn’t come out fired up so all week we practiced hard and told them we had to come out and wrestle hard and I think we did that.”

Ryan Ford and Jeremy Bosher both finished the night 1-1. Bosher earned a forfeit at 285 while Ford pinned Cardinal’s John Avalon in 1 minute, 43 seconds at 220 pounds.

“That was actually his idea,” Lange said of Ford’s decision to bump up to 220. “He told me, ‘I want to bump up and wrestle.’ He stepped up and wanted the competition. It was awesome.”

Berkshire 170-pounder Lucas Stoddard, the 2019 Chagrin Valley Conference champion, suffered two setbacks when he dropped a 10-5 decision to Newbury’s Tom McKale then was pinned in 2:24 by Cardinal’s Jerry Rose.

“I think those are good losses for him,” Lange said. “Being a freshman, he’s still doing a lot of learning. He’s a great technician but he’s still got to learn he can’t muscle guys that are stronger than him.”

Shanower and Strever won by pin and both added a forfeit at 126 and 132, respectively, while Rose pinned both of his opponents.

“It’s the old adage, we won the battle but lost the war and against Newbury especially,” Cardinal coach Jeff Zeigler said. “Against Berkshire, we lost the matches wrestled, which we always try to win them but it’s hard to win duals with so many forfeits. We knew that going in, but it was good to compete and my kids did a really nice day today. They stepped up and put on a nice show for the crowd. They fought for every point and didn’t give up pins.”

Rose, who finished second at the CVC tournament last week, pinned Newbury’s Nathan Moltar in 1:14 at 160 pounds then bumped up to 170 to face Stoddard in the nightcap.

“Jerry isn’t getting the recognition he deserves and we bumped him up to wrestle some good kids all year,” Zeigler said. “He wrestled a good kid against Twinsburg on Wednesday so hopefully he’ll get the recognition for his talent. He’s doing an awesome job.”