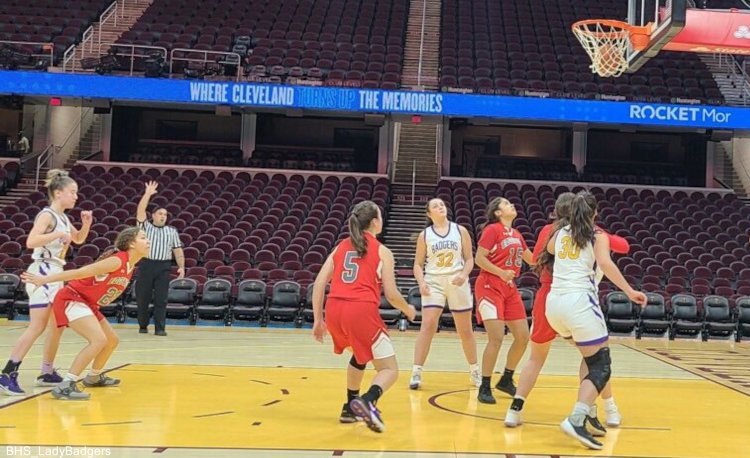 Lydia Kastor and Kylie Neumore both scored in double figures in leading Berkshire to a 45-24 win over Edgewood at Rocket Mortgage FieldHouse on Wednesday.

With the win, the Badgers improved to 4-6 on the year after starting out 0-4.

“Wins are hard to come by because so many of our opponents are high-quality teams,” said Berkshire coach James Bosley. “It’s nice to just be competitive game to game, but getting a win against a quality team like Edgewood really helps our team confidence and helps us keep pushing to reach our potential.”

Edgewood held an 18-13 advantage at halftime but the Badgers found their stride and outscored the Warriors in the second half, 32-6.

“The girls really started clicking in the second half on both ends of the floor,” Bosley said. “Kylie Neumore had a great second half, not just scoring but her defense set herself up to get some steals and set her teammates up to jump passing lanes and get steals. She was a difference-maker for us.”

“When we get things going on defense forcing turnovers it really spreads to the offensive side of the floor,” Bosley said. “Hayley Stoddard had two big transition baskets in the second half that helped us get the lead and then stay in control. Lydia Kastor was a consistent threat all game finding openings and knocking down four 3s in total, but it was her ability to get in the paint and score or set her teammates up that made our offense effective.”

“Individual defense assignments helped because we were really communicating in where Kaci Kanicki was on the floor,” Bosley said. “We were able to rotate on who was guarding her and everyone played her a little different, so it helped keep her off balance even though she’s a really talented player and was able to find some openings.”

Berkshire travels to Brooklyn on Friday while Edgewood hosts Beachwood.