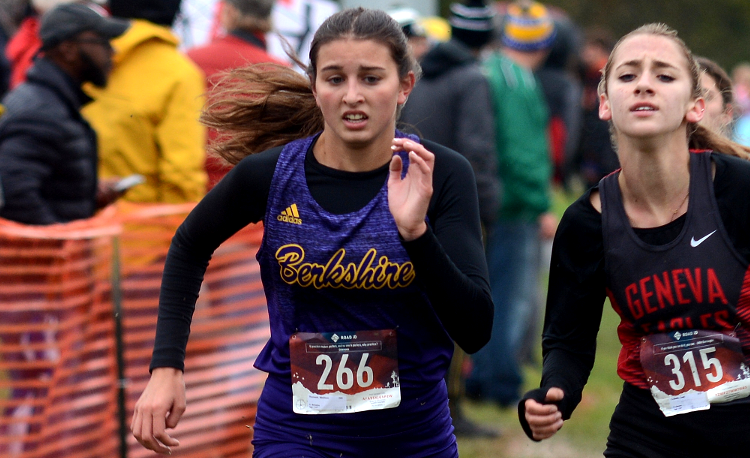 With five returning starters, including four who qualified for the regional meet last season, Berkshire’s girls’ cross country team has its sights set on competing at National Trail Raceway in the state meet on Nov. 2.

To punch their ticket to the state championship, the Badgers have some work to do. Regional qualifiers Gabby Adams, Madison Romask and Lizzy Dingman return to provide Berkshire with a solid core to lead the pack.

“The girls have a lot of potential to be a state-bound team led by Romask, Adams, and Dingman,” Berkshire coach David Kindall said. “With only eight girls on the team, we will have to focus on staying healthy. We were plagued with injuries last year that prevented us from getting to the regional meet (as a team).”

Romask, a senior who placed 38th at regionals last fall, returns as the only Badger with state meet experience. She placed 20th as a sophomore in 2017 and 51st as a freshman in 2016. She was named first-team All-Chagrin Valley Conference last season.

“I’m looking for Romask to come out strong this year and help lead the team to the 2019 state meet,” Kindall said. “She put in a solid summer and is looking to get back on the podium at the state meet this year.”

That leaves the door open for new faces to lead the pack.

“The boys’ team is looking to repeat as the CVC champions this year and make a run for a regional qualifying (spot),” Kindall said. “We lost a lot of the key guys in the lead pack last year, so it’s going to take some of the guys that were on the varsity bubble last year that need to step up and be leaders on the team and course.”

Bennington and O’Conke both were named second-team All-CVC last season.

“I’m looking for Ethan to step up this year and be a leader on and off the course. He is coming off a good track season where he got to be one of the main guys at meets, and I am hoping that competitiveness carries over to cross country,” Kindall said. “I am looking for Robert to lead the team for the fourth year. He has been a regional qualifier individually and first-team CVC in the past, and I am going to need him to do it again to help the team back to a CVC title and regional qualifying spot.”

Kindall hopes to see Klem build off a solid spring on the track.

“I am putting Caleb right with Ethan this season in being a leader,” Kindall said. “He too came off a good track season where he was one of the main components and I am hoping it carries to cross country.”

“Jackson has really improved since last season,” Kindall said. “He was a guy that only got a few tastes of varsity races last year, but once he did, he didn’t look back. Jackson ran track for the first time this past season and it shows how much it has helped him. Jackson is going to be one of the top guys on the team this season.”