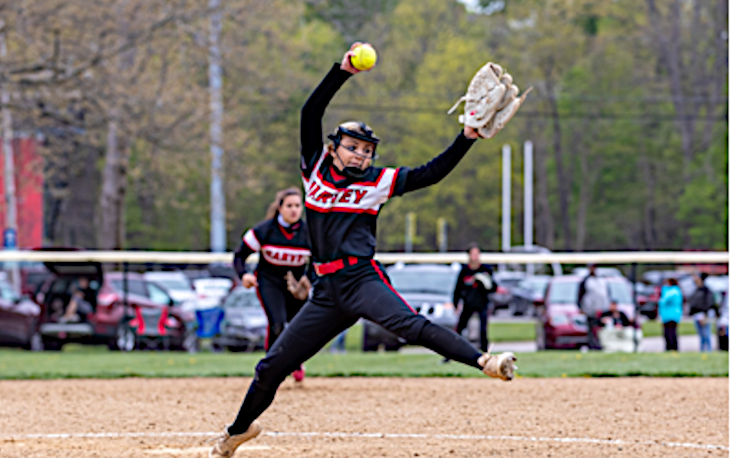 Harvey used a pair of big innings to down visiting Chagrin Falls in a crucial win for the Red Raiders on Wednesday, 11-0.

With the win, Harvey remains in first place in the Chagrin Valley Conference Chagrin Division with a 7-4 record. Hawken is in second place with a 5-4 mark.

Alexa Bailey had a big day for the Raiders as she allowed just three hits and a walk with 11 strikeouts in five scoreless innings of work. She also went 2-for-4 at the plate with a double and an RBI.

Bailey’s leadoff double in the first sparked a five-run Raider rally. Four singles and an Adrienne DiPierro later and the Red Raiders held a 5-0 advantage.

Leah Miller led off the Harvey third with a single and later scored on Georgia’ Hull’s single to push the Harvey lead to 6-0.

Hull finished the game 2-for-3 with two runs batted in.

“Georgia Hull has been on a mission this season to break into the lineup and make a big impact on our team,” said Harvey coach Betsy Hada. “In these last two games, Georgia took full advantage of her opportunity. She has proved herself to be a threat at the plate in clutch situations.”

Harvey put the game out of reach with a five-run fourth.

Rachael Boykin singled to lead off the inning and Lola Thomas followed with an RBI triple. She’d score on an error. Tressa Overbey and Bailey also had RBI singles in the inning.

Boykin finished the day 3-for-3 at the plate while Bailey and Hull both recorded two hits.

The Red Raiders collected 12 hits in 22 at-bats and Bailey shut down the Tiger bats.

She faced just 19 batters and fanned five of the final six Tigers she faced.

“Alexa Bailey had a great day again on the mound,” Hada said. “The sophomore duo of Bailey and Lola Thomas behind the plate has been crucial to our success this season.”