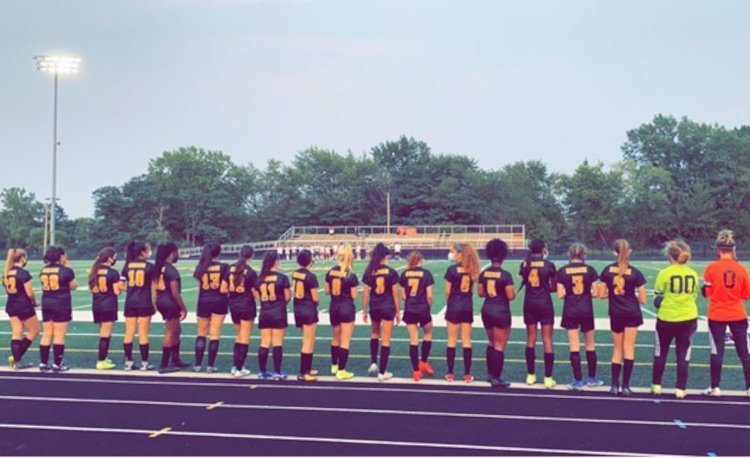 Beachwood returns seven starters but the Bison will have plenty of new faces in the lineup this season.

The Bison, who finished last year with a 6-9 record overall and a 3-5 mark in conference play, have several question marks but even more potential.

“We have a very young team,” said second-year Beachwood head coach Dana Raponi. “That is very exciting because this is when a team will experience the most growth at one time. There are going to be a lot of key holes to fill but that leads to lots of potential for these returning and young players alike. With a large team and a full varsity and JV squad, constant competition will be had in training sessions which often leads to everyone becoming a better player overall.”

Despite the graduation losses of four seniors and another key player, Raponi’s expectations remain high.

“With the loss of four seniors and then also one key striker moving to a different school district, we do have holes throughout the pitch,” she said. “We plan to really set the bar high for our returning players to pull their weight and then plus some, and then giving a lot of open competition for the new players to earn those missing spots. We plan to have a lot of movement with positioning in order to identify the best combination of players.”

As is the case with any team, the Bison have to play their way into becoming a cohesive group of 11 that plays as one on any given night.

That’s the first challenge the Bison have to overcome this season.

“It will be vital that the more senior players work to develop our younger players,” Raponi said. “Constant and consistent communication and teamwork will be key this season.”

Fortunately for the Bison, the seniors are talented and experienced and are up for the challenge.

“We’re really going to need to lean on the senior players and capitalize on the shoes that they are stepping into,” Raponi said. “With a large turnout of players every practice, every training session, and every game is a fight for a position so I am hoping that fuels the desire to improve on those weaknesses. It will be a bit of a chess match figuring out the most logical and beneficial combination of players and positioning.”

At least one forward position is settled as the dangerous Romi Roth returns for her fourth season on the varsity.

“I’m very excited to have Romi back this year,” Raponi said. “I’m looking for her to be vital in creating opportunities as well as finishing those she gets.”

The Bison also have a pair of seniors who will work out of the midfield in Allison Saghir and Aaliyah Edwards.

“Allison was new to Beachwood in 2020 and now that she has her feet wet and the lay of the land, I am very excited to see her step up in her role on the team and shine as the leader and impact player that she is,” Raponi said. “I’m looking for big things to come from Aaliyah this year. With her strength and speed, she will be vital in the center midfield to control both the defense and attack.”

On defense, senior Amelie Cotta, a second-team all-conference performer last season, will team up with juniors Briahana Golubitsky and Taylor Blackwell to create a wall in front of the net.

“Last year, Amelie really made a name for herself on the defensive line. She is a very passionate player who takes the game seriously. I am looking for her to play a key role with her speed, her grit, and desire to always be better than the day before,” Raponi said. “Briahana is another impact player. She is very smart and tactical on the field. Her communication and leadership are going to be an asset to the Bison defense but also skilled enough to create opportunity up front and through the midfield. (Amelie) is a player to watch out for in the upcoming season. Taylor has worked so very hard on her game. She is an absolute thrill to watch in defense as not many get past her easily. Taylor has worked her way up to the starting rotation and will continue to dominate in that sweeper/deep defensive role. I’m looking for her to lead by example and keep growing as a player this upcoming season.”

The Bison have some holes to fill, and that will be a challenge, but with the numbers in the program and the corresponding talent, Raponi is confident better days are ahead for her squad.

“With a doubled roster size, lots of incoming players, it will be a struggle at times to bring everyone to the same level, but I’m excited to have a large squad to work with and continue to build and grow the program,” she said.