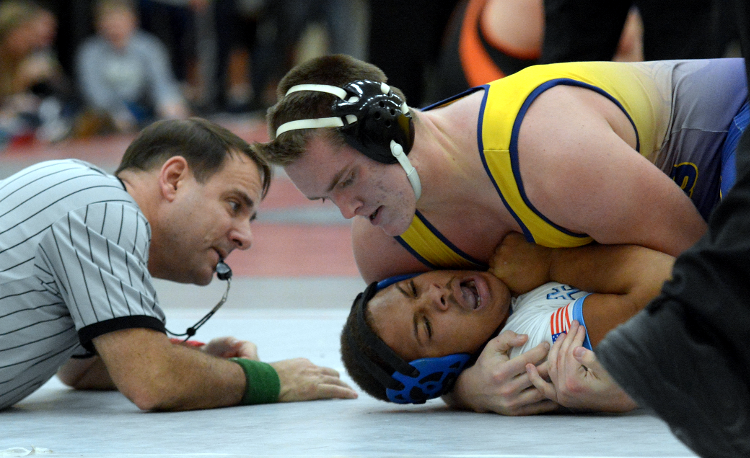 Independence’s wrestling team faces adversity every day, so the Blue Devils will be ready for any challenge they encounter during the 2019-2020 season.

With 26 wrestlers, the team has outgrown its current practice facility, which is a good problem to have considering the alternative as many other teams are facing a shortage of wrestlers.

“Our numbers have been steadily growing over the last six years,” said Independence coach Ken DeAngelis, who is in his sixth-year as the head coach and 14th year at the school. “We will have 26 guys on our team this year and because of that, we can’t fit in our high school wrestling room. We also have more middle school wrestlers and youth wrestlers than we have ever had before.”

The Blue Devils have 16 middle school wrestlers and 40 in the youth program, setting the program up for a continued run of success.

Among the 26 high school wrestlers, eight are returning district qualifiers and one was a state alternate.

“We will have a full squad that competes each week,” DeAngelis said. “We have a good mix of experience and youth. With so many guys in the room, the guys are always pushing each other.”

That competition will be necessary as the Blue Devils have a lot to prepare for with a challenging schedule that includes the North Coast Classic, Waynedale Duals, and the Brecksville Holiday Tournament as well as head-to-head duals against Cuyahoga Heights, Crestwood and Grand Valley.

The Blue Devils will start freshmen Sammy Sidor or Vinny Kubicki at 106.

Junior Collin Patton will wrestle at 113 after placing third at the sectional tournament in each of the past two seasons.

“Collin has put a lot of time on the mats this past summer and is starting to really understand the sport of wrestling,” DeAngelis said. “He’s a very hard worker.”

Freshman Jonathan Perry will compete with Patton at the weight class.

At 120, sophomores Jack Valenti and Joe Botzman will battle it out for the starting spot.

“Jack has only been wrestling for a couple of years and continues to find ways to help the team,” DeAngelis said.

Junior Richie DiGeronimo is at 126. He placed fourth at sectionals in 2018 but suffered an injury in the postseason opener last winter.

“Richie is a great kid to have on the team,” DeAngelis said. “He is very coachable and is always trying to improve.”

Freshmen Luke Pascarella and Chase Manelski are slotted at 132 and senior Liam Walker returns at 138 after closing out last winter with 18 pins and a fourth-place finish at sectionals.

“He is a very unconventional wrestler and you don’t want to take your eyes off him while he’s on the mat,” DeAngelis said of Walker.

Senior Anthony Presot is projected to start at 145 but sophomore Lucas Martinez will push for time on the mat.

“(Presot) came out last year after wrestling in middle school. He’s a good kid who works hard,” DeAngelis said. “Lucas is very wiry and seems to get better every practice. He has a lot of untapped potential.”

Senior Jimmy Senick has 152 locked down. He was 29-15 last year with 20 pins. He placed second at sectionals last year and third the year before.

“He is a fierce competitor who never quits,” DeAngelis said. “He’s a three-sport athlete who just likes to compete. He has been wrestling for a long time and I’m excited to see what he does this year.”

Juniors Nate Coudriet and Ben Vitron are projected at 160 and 170, respectively.

“Nate lived in the weight room this summer and spent time at camps and open mats. He made great improvements since last season. I expect a big improvement from him this year,” DeAngelis said. “Ben has worked hard to continue to develop his wrestling skills. He is a good teammate and will do whatever he needs to help the team.”

“Last year was Bryan’s first year of wrestling since youth, “DeAngelis said. “He is a really good athlete and picked things up quickly. He works hard every day and has some great upper weights to work with in our room.”

Senior Luke Clymer won 35 matches with 20 pins last season and is a two-time district qualifier. He’ll wrestle 195 this season and needs just one win to reach 100 for his career.

“Luke is the kind of guy every coach wants on his team,” DeAngelis said. “He always gives his best, leads by example and is a high character young man. Last year, Luke had pins over Charles Taylor (Geneva) and Alex Piczer (Newbury) but didn’t have a great district tournament. We have really high hopes for Luke this year. He is dropping a weight class and should be a really strong 195.”

Senior Braden Sears dropped to 220 from heavyweight, where he finished 30-12 with 22 pins and was as a state alternate after winning a sectional title and placing fifth at districts.

“It took Braden three years to get onto a high school wrestling mat but it was worth the wait,” DeAngelis said. “He was injured and lost both his freshman and sophomore seasons. He stepped onto the mat as a junior and didn’t miss a beat. He was a very small heavyweight last year but did what was best for the team. We are excited to see what he can do this year at his more natural weight of 220.”

Junior David Dorko joined the squad in the middle of last season and will wrestle 285. Junior Ricky Dilworth also will compete for time at the weight class.

“Although he didn’t get a lot of matches, (Dorko) definitely helped our upper weights in the practice room. He is a big strong kid who will take over at heavyweight,” DeAngelis said.

With talent and depth, the Blue Devils have the potential to reach all of their goals and more this season.

“Our team goals are to be better today than we were yesterday and be better tomorrow than we are today,” DeAngelis said. “I know that’s very cliché but we preach that every day in the room. If we do that, we have the potential to compete for conference and sectional titles.”