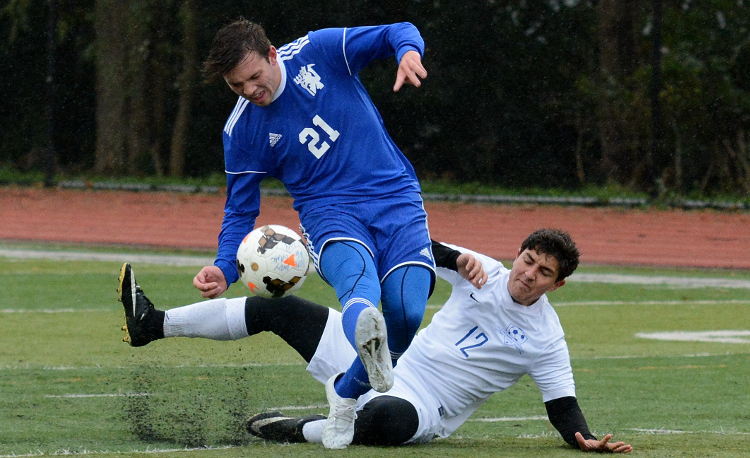 Sure, the Blue Devils hope to repeat as Chagrin Valley Conference champions and advance as far in the postseason as possible, but with several new faces expected in the lineup, the team must not rely on past success to achieve its goals.

“We have to find our own identity this year,” sixth-year head coach Ryan MacRaild said. “With losing one of the top players in the state, other guys are going to have to step up and take charge. It will be a new looking team even though we have seven starters coming back.”

That experience should help the Blue Devils put their Elite Eight loss to eventual state champion Archbold in the rearview mirror and fully concentrate on the new season.

“I see 2019 as a chance for the Blue Devils to build upon our success of last year, finding new players to fit into holes vacated by our seniors and meeting our regular goals,” MacRaild said.

The Blue Devils have achieved a five-year record of 85-8-5 with just four regular-season losses sprinkled in.

Independence’s senior class has won three straight district titles. A fourth won’t come easily but the program has established its own standards for training and competition.

“We will have to fill in a few key roles this year in all three lines of the field,” MacRaild said. “Some guys are ready and waiting in the wings, others we are going to have to really work to prepare to contribute. It is all part of the process of a small school program. We don’t have endless players to pick from. 22 guys came out and 22 guys are who we have to pick from. We need to not rest of past success. This year is going to challenge us in that way.”

Goalkeeper Ethan Manelski is one of five seniors expected to start for the Blue Devils and he has proven to be one of the best stoppers in the area.

“Ethan may be one of the top keepers in the state, but certainly in greater Cleveland,” MacRaild said. “His PK save in the regional semifinal last year was the biggest this team has ever experienced. His reaction saves, height in the air on corners and shot-stopping ability set him apart from many others we will face this season.”

“Adam is a natural goal scorer,” MacRaild said. “He has contributed greatly to the score sheet since his freshman season; this year should be no different. He has an uncanny ability to keep the ball at his feet, but is also one of our best defenders.”

McDonald and Streibel combined for 19 goals and 25 assists out of the midfield last year.

“Elek has spent the offseason playing high-level club soccer at the national level and looks to continue his record-setting performance as assist leader,” MacRaild said. “He can also score goals from anywhere on the field.”

Streibel found the back of the net four times and added eight assists as a junior.

“Christian is a very technical player, strong defensively and great on the counter-attack,” MacRaild said. “His service from the wing and on set pieces can be lethal.”

Senick is a formidable defender with the ability to shut down the opposing team’s top scorers.

“Jimmy may be one of the top defenders in the state,” MacRaild said. “He is always up to challenge teams’ top scorers in man-marking defense. He has held some of the top named players scoreless over his tenure with the Devils. I expect more of the same from this staunch defensive leader.”

McGhee scored seven goals and added eight assists as a freshman and Stralka was reliable on the backend.

“Though a younger player, (McGhee’s) experience puts him ahead of his peers,” MacRaild said. “He can distribute and hold a ball facilitating well from inside and outside. He assists and scores well for a young player. Emmett is another top defender. His quickness and ability to track down attacking players is his bread and butter. He’s possibly the fastest player on the field at any time.”