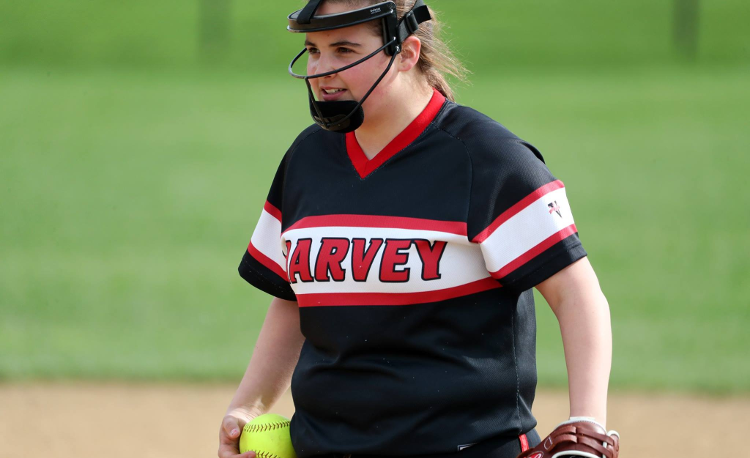 The Red Raiders snapped that winless streak with a 21-2 victory over St. John’s on April 4 and after Thursday’s 14-4 five-inning win over visiting Orange, the Red Raiders have now won two straight.

“The momentum from the win yesterday against Hawken carried into our game today against Orange,” Harvey coach Betsy Hada said. “We had all cylinders firing on offense.”

Trailing 2-1 in the second, the Red Raiders scored six runs in the bottom half of the inning and added six more in the fourth. Harvey added a run in the fifth to invoke the run rule.

“Payton Kalina got up to bat in the fifth inning and drew a walk-off hit by pitch to close out the win,” Hada said.

Samantha Tackett led the way for the Red Raiders as she finished the game 3-for-3 with three runs scored, a double, a triple, two stolen bases and she drew a walk.

“Samantha Tackett was seeing the ball well tonight,” Hada said. “She set the tone in the first inning ripping a triple down the left-field line in her first at-bat. Her heads up base running allowed her to score two more runs throughout the game.”

She was 3-for-4 with a double, two runs scored and two stolen bases. The first-year players is now batting .364 with a .500 on-base percentage and is 12-for-12 in stolen base attempts.

“Tressa Overbey has come into her own over the last two weeks,” Hada said. “This being her first season ever playing the game she has made an immediate impact on our success.”

Rachael Boykin allowed four unearned runs and struck out six in 4 1/3 innings of work to pick up the win. She also added a double at the plate.

Keristin Cruz relieved Boykin in the fifth and pitched out of a jam.

“Rachael Boykin earned the win for the second night in a row,” Hada said. “Keristin Cruz came into the game out of the bullpen to shut down Orange’s offensive threat in the fifth inning with two quick outs.”

Harvey travels to Geneva on Friday.