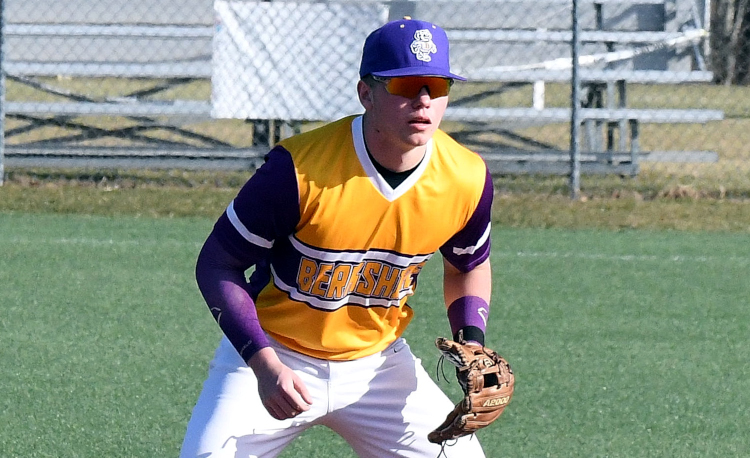 Once Jake Brown settled in on the mound the Berkshire senior was nearly unhittable in the Badgers’ 5-1 win at Lakeside on Saturday.

Brown allowed one unearned run on two hits and struck out 12 in the complete-game victory.

“Lakeside’s lineup is tough,” said Berkshire coach Nick Burzanko. “The leadoff guy started with a single and the three-hitter hit an off-speed pitch to the fence to score him from first. After a walk in that inning, Jake settled in and just went to work on the lineup. Our defense made routine plays when we had to, but it’s always good when your pitcher settles in and just deals.”

Both of the hits Brown allowed came in the first inning.

Lakeside’s Brandon Ford singled to start the Dragon first. He moved to second on a passed ball and scored on Ashton Wheelock’s double.

After allowing a leadoff walk in the second, Brown retired 18 of the next 19 Dragons he faced. The only Lakeside batter to reach base safely did so on an error.

“Everything seemed to be working,” Brown said. “I was able to locate my fastball and my breaking ball had a lot of movement, which complemented my fastball well. In the first inning, I missed my spots a couple of times, which resulted in the hits and one run. Knowing I have a good defense behind me and trusting my ability to come back and start locating my pitches kept me from losing composure.”

With Brown locked in, the Badgers went to work on offense.

Brian Brent drew a leadoff walk in the second and scored on Evan McDermott’s single to tie the game at 1-1.

The Badgers added four more runs in the fourth to close out the scoring.

Garrett Bosse drew a leadoff walk and Miles Miller hit a one-out single. Blake Jenkins stepped to the plate with two outs and hit a two-run double. Brown then singled, which allowed Jenkins to score on an error and Brent delivered a two-out single to make it 5-1.

Brown and McDermott both finished the game 2-for-4.

Brown is now batting a team-best .568 to go along with his team-low 0.404 earned run average on the hill.

“Jake is our leader,” Burzanko said. “He hasn’t pitched a lot this year but when he is on the mound he competes his butt off. He was very efficient with the fastballs and his off-speed pitches really kept the lineup off balance. It helps that he can throw hard and spot it up very well. His bat is very good. He’s very disciplined at the plate and doesn’t lose out on swings. He’s our three-hitter for a reason. He hits the ball to all fields and puts a lot of pressure on opposing teams.”

With the win, Berkshire improved to 9-5 on the year and the Badgers quickly put Friday night’s disappointing loss behind them.

Berkshire led McKinley 8-3 in the fifth inning before dropping that game, 9-8.

“Bounce back wins are a good sign of the competitiveness the guys have in them,” Burzanko said. “We played really well (on Friday) and just didn’t finish when we had the chances. The guys came out focused and determined to get a ‘W’ today and they did that.”