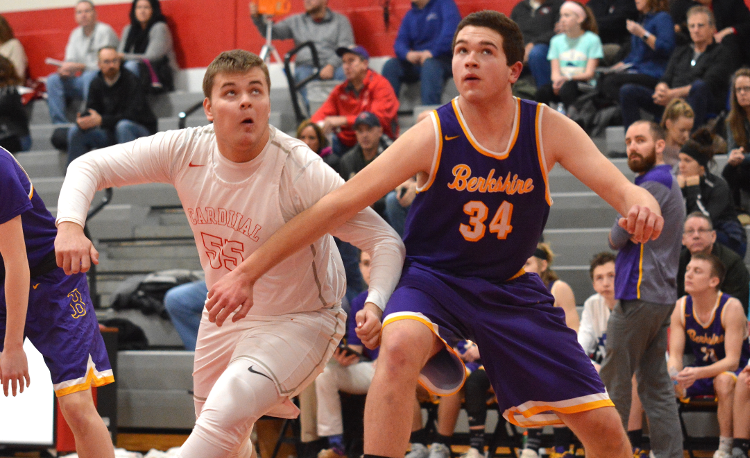 MIDDLEFIELD—The Berkshire-Cardinal rivalry is as fierce as any in the state and in most seasons the teams settle for two regular season contests to determine the next year’s bragging rights.

On Tuesday, Cardinal topped the visiting Badgers, 67-44, in a Division III sectional semifinal to claim a third win over their rivals in one season. That has happened only one other time since at least 1999 when Berkshire beat Cardinal in a 2011 sectional championship, 64-47.

“It was great to beat them not only twice but to beat them a third time was great,” Cardinal coach Jon Cummins said. “I know they were down some guys, but you’ve still got to go out there and focus and play hard. We did that at times.”

Berkshire entered the game down two starters and the Huskies took advantage by building a double-digit lead at halftime.

“They came out and played hard,” Cummins said of the Badgers. “With the guys they had on the floor, they played as hard as they possibly could. I wasn’t extremely happy with the way we played but I’ll take a win anytime we can get it.”

Cardinal extended its lead to as many as 25 points in the third quarter before the Badgers found some success driving to the basket.

“We kind of lose focus sometimes,” Cummins said. “I think sometimes they see us up by 20 and they stop playing a little bit. You’ve got to play the game instead of playing the score. Sometimes we play the scoreboard too much but we did some good things. We put a lot of pressure on them and scored some easy baskets.”

Berkshire pulled to within 52-37 heading into the fourth.

“Our goal was to get it back into single digits going back into the fourth but we just weren’t able to get over the hump there,” Berkshire coach Ryan Dickard said. “The seniors played hard and a lot of guys played roles they weren’t accustomed to coming into this game. We knew that but our goal was to compete and play extremely hard and see where the game would go from there. It was a great experience for those younger guys because they’ll be taking the reins next year. It was a heck of an effort from the older guys to keep it close.”

Cardinal’s Matt Carney led all scorers with1 8 points while Robbie Bruncak and Daniel Heredos also scored in double figures with 16 and 12 points, respectively.

Cardinal advanced to play at top-seeded Lutheran East on Friday.

“I told the kids in the locker room, ‘I’m not going to sugar coat anything to you, this team we’re playing is really an excellent basketball team,’” Cummins said. “I told them to come out and compete and do the best they can and realize you’re not just playing for yourself but you’re playing for the guy next to you and your school, so have some pride and do the best you can every single second you’re on the floor.”