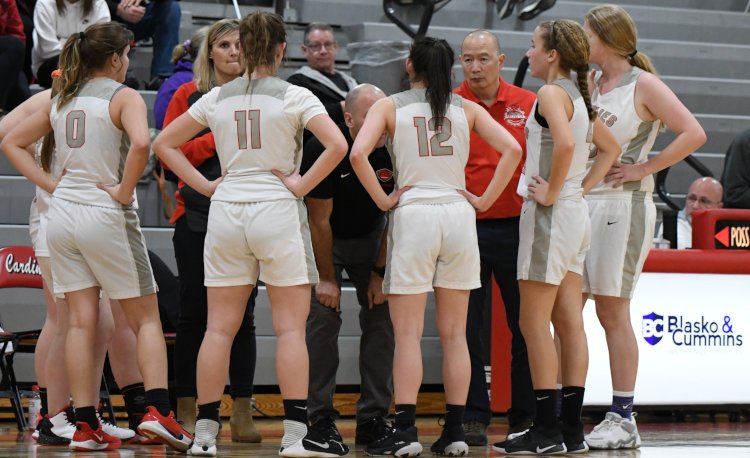 MIDDLEFIELD—Hall of Fame college football coach Bobby Bowden once said, “I am not happy with moral victories. Those things are forgotten.”

The Huskies fell short in their upset bid of the undefeated Kirtland Hornets, 51-45, but what they accomplished in the fourth quarter is a lesson the Huskies will carry with them throughout the rest of their lives.

Cardinal senior standout Haley Domen scored seven points in the first quarter and was on her way to another outstanding performance before suffering a non-contact knee injury in the second.

After losing their top scorer and top player over the past four seasons, it would have been understandable for the Huskies to hang their heads and fade away into the background as the Hornets cruised to an easy victory.

Instead, Ronee Collins picked up the slack and scored five points in the second quarter to keep the Huskies within nine points of the Hornets at halftime.

Collins opened the third quarter with back-to-back 3-pointers and Carly Ayer hit two more 3s as the Huskies made their move on the Hornets.

And then Collins suffered a non-contact foot injury and, like her teammate, was carried off the court.

“It’s hard to even think about the game right now,” said Cardinal coach Joe DiMattia. “That was our best chance to beat them in a long time and even though we made a ton of mistakes, that’s all stuff we could have fixed. I guess it’s our turn to have that next man up mentality. In the second half, it wasn’t as dark as I thought when you see Domen and Ronnie go down, but obviously, it’s going to be hard now. Our girls responded.”

Two potential season-ending injuries in a span of 15 minutes of gameplay gave the Huskies every reason to shut down both emotionally and physically.

Instead, the opposite happened and the Huskies made one final run and outscored the Hornets in the fourth quarter, 11-4.

“I think Cardinal was very motivated and they had their team’s back,” said Kirtland coach Brittany Zele. “I think that kind of lit a fire underneath them.”

Cassie Nguyen, who took over for Domen at point guard, scored four of her six points in the fourth quarter. Anna Layman scored all four of her points in the final eight minutes. Lindsay Hissa scored her only bucket of the game during that run and Hailey Keller added a free throw in the period.

“We’ve always had Cassie as kind of our backup point guard and she did very well,” DiMattia said. “Carly Ayer stepped up and made some shots and Ronnie, before she got hurt, she hit some big 3s.”

Cardinal’s rally fell short but the Huskies have a lot to be proud of.

First, they rallied behind their injured teammates. Second, and more importantly, they learned a valuable lesson through a moral victory that won’t soon be forgotten.

While the injuries to Domen and Collins could be considered season-ending, the Huskies still have more than half of their season to play. They now know they have the talent and, more importantly, the will to be competitive.