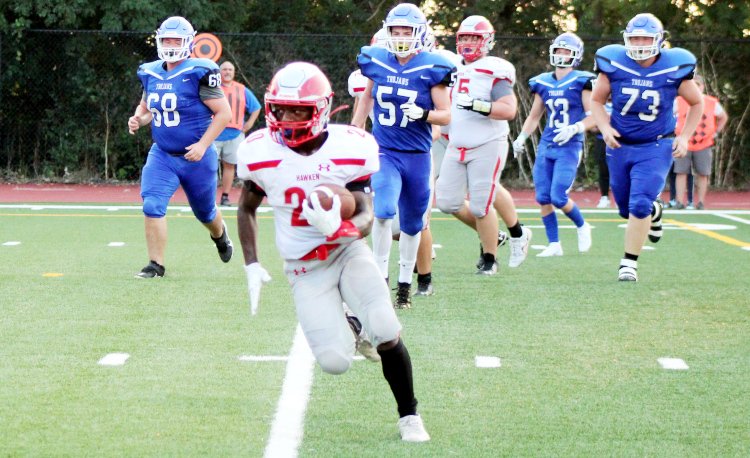 All statistics ocurred during the weeks ending Sunday, August 22. 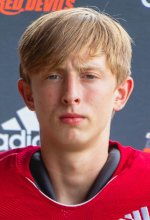 Name: Evan Daniels
School: Crestwood
Grade: 12
Stats: 8-of-16 passing for 241 yards and one touchdown; recovered two fumbles on defense
Coach’s Quote: “Evan and the offense started out slow,” said Crestwood coach Jack D’Amato. “Evan continued to be the leader we expect him to be as a two-year captain. He kept his teammates engaged and when the time was right, he took advantage of the big play opportunities that presented themselves. On a timeout, Evan came to offensive coordinator Bruce Rininger and said, ‘Let’s run this play, the safety is moving to the motion so the route should be open.’ Without hesitation, the OC called Evan’s play and it played out just as Evan explained for a 49-yard touchdown to Aidan Gutglueck.” 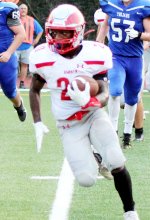 Name: Dominic Johnson
School: Hawken
Grade: 11
Stats: Carried 23 times for 191 yards (8.3/carry) with four touchdowns; caught two passes for 80 yards and one score; recorded four tackles with one tackle for loss and a 32-yard interception return for a touchdown; two punt returns for 36 yards; 339 all-purpose yards; tied school record with six touchdowns in a single game
Coach’s Quote: “Dom had a great performance,” said Hawken coach Brian Stephenson. “This was his first game since 2019–he sustained a season-ending injury prior to the 2020 season–and he showed how dynamic he is with the ball in his hands. His effort in the weight room and speed work during the offseason showed itself on the field. His teammates did a great job of blocking for him, and Dom did an excellent job of setting up blocks and running physically to help the team.” 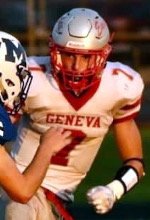 Name: Brady Peet
School: Geneva
Grade: 12
Stats: Carried 14 times for 103 yards and three touchdowns; caught one pass for eight yards; returned a kickoff 89 yards for a touchdown; recorded six tackles, one assist, and defended a pass
Coach’s Quote: “Brady had a breakout performance that led the way for our victory over Madison,” said Geneva coach Chip Sorber. “He played both offense, defense and is on all special teams. He rarely comes off the field. He played like the senior captain he is.” 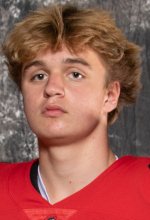 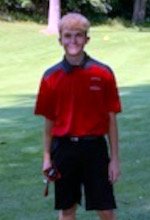 Name: Mason Feather
School: Edgewood
Grade: 9
Stats: Shot a 38 at Painesville Country Club
Coach’s Quote: “Mason scored a 38 at a tough Painesville Country Club course this week,” said Edgewood coach Chris Juncker. “That was his best score of the season and he is improving every day. Mason is a freshman this year and has really started to feel comfortable in competitions on the golf course. I’m looking for him to continue to do great things this year.” 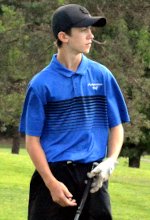 Name: Mark Pillar
School: Independence
Grade: 10
Stats: Medalist at CVC Preseason Tournament (75), second at Trinity Invitational (73), and carded a 39 and a 37 in two league duals
Coach’s Quote: “Mark started out on fire, posting scores that showed his influence individually this season as well as sparking the team to tournament wins and dual match wins in the CVC,” said Independence coach Mike Marcinko. 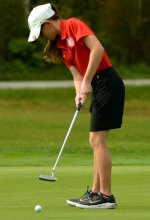 Name: Ella Wong
School: Hawken
Grade: 11
Stats: Won the CVC Preseason Tournament with a new school record 73; medalist in all three duals with an average score of 40; tied for fifth at the Blue Devil Invitational (74)
Coach’s Quote: “Ella works extremely hard on her game,” said Hawken coach Jennifer Creech. “She clearly is a favorite to win the CVC title for the third straight year and is motivated to make it to Columbus again. Ella is liked by all her teammates, coaches and competitors, and I look forward to watching her game develop this season.” 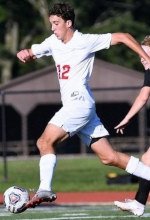 Name: Gage Gretter
School: Hawken
Grade: 11
Stats: Scored three goals with three assists
Coach’s Quote: “Gage Gretter picked things up where he left off last season,” said Hawken coach Vlad Muresan. “A decisive player for the Hawks, Gage had two goals and two assists in the first two games of the season. In his last preseason friendly, he also notched a goal and an assist versus St. Vincent-St Mary. However, his individual and collective best is still to come.” 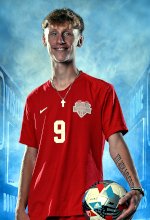 Name: Coby Rockwell
School: Edgewood
Grade: 12
Stats: Scored four goals against Conneaut
Coach’s Quote: “Coby has a knack for making himself available in several ways,” said Edgewood coach Greg Myers. “His continued movement gives many options to play the ball off of and for finding space to make timely runs. He provides good leadership up top and has a good work ethic. All these attributes make for a great teammate and for a skilled supporter for the midfielders and wings.” 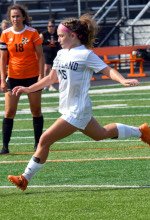 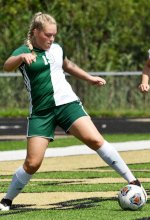 Name: Paige Fox
School: Lakeside
Grade: 12
Stats: Scored four goals in two games
Coach’s Quote: “Paige got off to a strong start for the season with four goals scored in the first two games, including a hat trick in one game,” said Lakeside coach Angelo Velotta. “She was able to score in a variety of ways on the field, and continues to develop her game.” 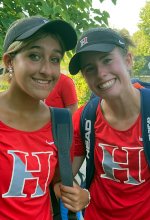 Name: Bea Hardacre/Anjali Jawa
School: Hawken
Grade: 10/10
Stats: Won two doubles matches, 6-1, 6-0 and 7-5, 6-2
Coach’s Quote: “Bea and Anjali have come up with big wins this season against conference teams,” said Hawken coach Brian Smallwood. “They are playing as a team and are performing well together. They have contributed in a great way to our 6-0 start as a team.”