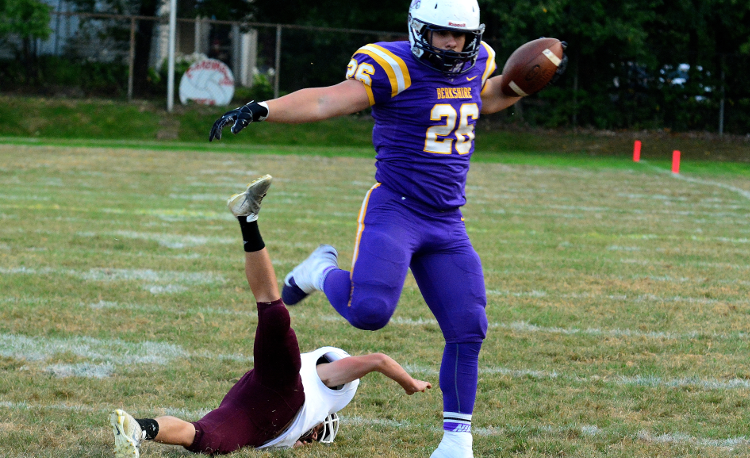 Berkshire, Geneva, Independence, Kirtland, Lutheran West, Perry and Wickliffe all improved to 2-0 on the year while Cuyahoga Heights won its season-opener.

Here’s a look at how each of the league’s 22 teams fared on Friday.

Chaney scored the first six touchdowns of the game to run away from the visiting Bison. Kendyn Wiggins returned a kickoff 83 yards for a touchdown and Will Hartson ran for a one-yard score for the Bison. Dwight DeVaughn also threw a 39-yard touchdown pass to Jalen Minter in the game. Hartson finished the game with 137 rushing yards on 11 carries.

The Badgers improved to 2-0 for the first time since the 2012 season thanks to the hard running of Ryan Pennypacker, who carried 32 times for 246 yards and four touchdowns. Jake Brown completed 13-of-22 passes for 245 yards and three touchdowns. Cody Paugh led the Skippers with 66 yards on the ground and Sam Schuster threw for 145 yards.

It was a tough night for the Tigers against their neighborhood rivals as defending Division III state champion Bombers racked up 455 yards of offense and limited the Tigers to just 115. Kenston led 41-0 at halftime.

Sophomore Zach Winchell threw for 296 yards and four touchdowns to lead the Warriors to a 1-1 record. David Nye scored Grand Valley’s only touchdown on a 3-yard run. He finished the night with 74 yards on 26 carries.

Hawken picked up its first win since Oct. 20, 2017 with a dominant performance against the Black Knights. The Hawks led just 20-14 at halftime then outscored the Black Knights in the second half, 20-0. Sophomore Terrence Robinson completed 9-of-12 passes for 109 yards and three scores and freshman Dominic Johnson ran for 194 yards and two touchdowns on six carries. He also caught a touchdown pass.

Lakeside was limited to just 131 yards of offense while allowing 329 to the Blue Streaks, who led 35-0 at halftime.

Brookside scored the first touchdown of the game but the Longhorns responded with 21 unanswered points to take control of the contest. Jonathan Bradley ran for 104 yards on 13 carries and scored a touchdown. Eddie Lewis added 88 yards on the ground and scored three times.

Streetsboro knocked off its second straight CVC Chagrin Division team with a 49-14 win over Orange. Streetsboro racked up 513 yards of offense compared to Orange’s 239. The Rockets ran for 413 yards in the win. Brian Pernell led the Lions with 99 yards passing and Diante White ran for a team-high 47 yards in the loss.

Perry led 24-7 at halftime then held on as the Hilltoppers made their move in the second half. Despite being outscored in the final 24 minutes, 26-7, the Pirates improved to 2-0. Drew Schiano stayed hot under center as he completed 21-of-24 passes for 341 yards and three scores. Jaylen Anderson led the Pirates with 71 yards on the ground and he caught a touchdown pass.

Wickliffe’s Isaiah Bolon and Chase Fortkamp each ran for two touchdowns as the Blue Devils topped the visiting Harvey Red Raiders 33-0 on Friday. Wickliffe racked up 400 yards of offense compared to 158 for Harvey. Fortkamp ran for 127 yards on 12 carries while Bolon finished with 98 on five. Jayden Debevec threw for 110 yards for the Red Raiders.