CVC golfers tee it up at state tournament 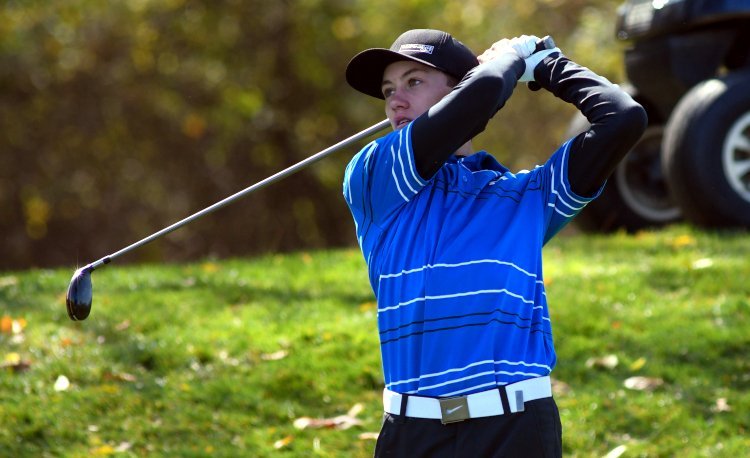 COLUMBUS—One round of the 2022 OHSAA state tournament is in the books for several Chagrin Valley Conference golfers.

“Ella had her worst nine holes to start but she is a competitor and she never gives up and she fought her way back,” said Hawken coach Jennifer Creech. “I think she was surprised that 76 would be leading but she got her game face on and she is prepared for tomorrow.”

Hawken is making its first appearance at the state tournament since winning the state title in 2013.

Kate Petersen carded an 82 to finish the first round in a tie for 15th place. Helena Yanchar and Keira Chang closed out the team scoring with a 99 and a 110, respectively. Lizzie Kent shot a 117.

“I wanted to see the girls have fun today– many were nervous but they held their own,” Creech said. “Putting was again the issue for all of them. We didn’t finish strong and hopefully, they will learn from this tomorrow.”

Independence finds itself in fourth place at the Division II tournament with 352 strokes.

“I was proud of the girls today,” said Independence coach Karl Schuld. “They hung in there under crazy windy conditions. The wind really impacted us on 9, 10 and 11. It was a tough stretch, but the girls never gave up. We look forward to competing again tomorrow.”

Molly McGreal led the Blue Devils with an 84, which left her in a tie for 20th place. Emma Konopa and Bel Trombetta both shot an 89 to tie for 31st, and Hillary Esper closed out the scoring with a 90, good for a tie for 35th. Macey McGhee shot a 91 to tie for 39th place overall.

Both the Hawks and Blue Devils tee off on Saturday at 9:00 a.m.

Chagrin Falls’ boys’ team closed out Day I at the Division II tournament at Ohio State’s Gray Course with a score of 343.

“The conditions were very challenging and were more demanding as the day went on,” said Chagrin Falls coach Anne Caja. “The wind on the back nine impacted every shot, including putts. Overall, I would say we had more struggles with putting than anything else. Hopefully, tomorrow we will be more comfortable with the greens and conditions and play to our season averages, which should help us make a significant move up the leaderboard.”

Drew Mergenhagen led the Tigers with an 83, good for a tie in 23rd place. Sven Nielsen was one stroke behind Mergenhagen and ended the day in a tie for 25th. Dylan Glickman and Gavin Stevens closed out the scoring with an 87 and an 89, respectively. Henry Westendorf shot a 101.

Independence’s Mark Pillar was the lone CVC golfer to play in the Division III tournament at NorthStar Golf Club in Sunbury.