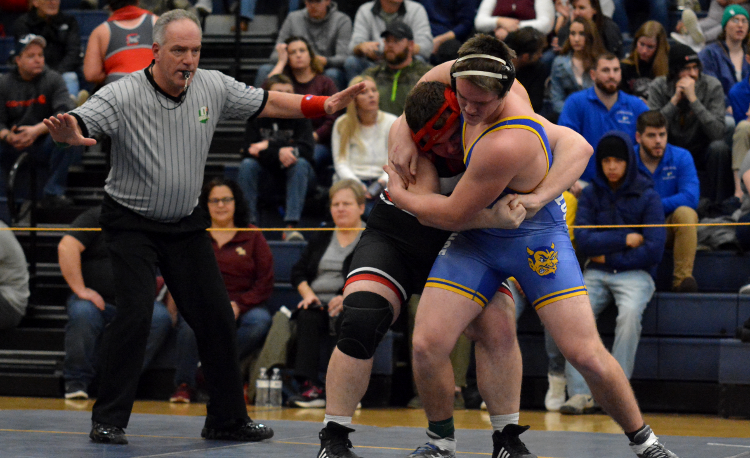 GARFIELD HEIGHTS—Nine wrestlers from the Chagrin Valley Conference won their first two matches and will wrestle in Saturday’s semifinal round at the Division III District Wrestling Tournament at Garfield Heights High School.

Hawken saw three of its four wrestlers win their first two bouts of the tournament and each wrestler is just one win away from earning a trip to next weekend’s state tournament in Columbus.

Freshman Patrick Reineke improved to 39-6 with a 48-second pin in the first round and a 7-1 win over Loudonville’s Justice Fraley in the quarterfinals. Reineke will wrestle league rival Nolan Frye from Cuyahoga Heights in the semifinals.

Frye advanced to the semifinals with a pair of major decisions.

Hawken junior Jackson Reineke is one win away from a return to the state tournament after he pinned his first two opponents at 120. Reineke will wrestle Waynedale’s Seth Unkefer in the semis.

Junior Will Lindsey was the third Hawk to reach the semifinals when he flattened both of his opponents in the 285-pound bracket on Friday. Lindsey will wrestle Dalton’s Joe Miller in the semifinals.

Kirtland senior Konnor Duncan also needs just one more win to make a second straight trip to the state meet. He recorded a pin and a major decision in the preliminary rounds and will face South Range’s Kyle Keenan, another returning state qualifier, in the semifinals.

Independence advanced a pair of wrestlers into the semifinals including Nick Rossi and Braden Sears.

Rossi, a senior, opened the tournament with a pin then beat Smithville’s Chase Keener, 4-0, to reach the semis, where he’ll wrestle Tuslaw’s Kyle Ryder, who placed fifth at state last season.

For Sears, the return to the mat has been a successful one.

The junior missed the last two years with an injury and now healthy he needs just one more win to earn a ticket to state. Sears flattened Loudonville’s Evan Campbell in the first round then caught Liberty’s Simi Moananu with a throw in the quarterfinals bout that ended in 2 minutes, 26 seconds. Sears will wrestle Smithville’s Joe Warren in the semifinal round. Warren placed eighth at state last winter.

Berkshire freshman 170-pounder Lucas Stoddard opened the tournament with a major decision then pinned a No. 1 seed in Rootstown’s William Hardenbrook in 5:14. Stoddard’s next test will be against Rittman’s Sevi Garza in the semifinals. Garza placed seventh at state last season.

Wickliffe 182-pounder Doug Byrne, a senior, made quick work of his first two district opponents as he cruised to the semifinals with a pair of pins. Byrne will wrestle Norwayne’s Kaden Kidd in the semifinals. Kidd is a returning state qualifier.