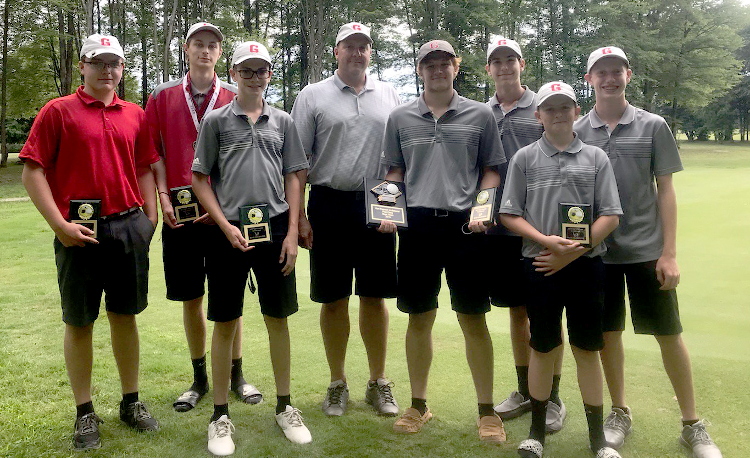 It was a banner day for the Geneva golf teams at the 2019 Karl Pearson Invitational at Maple Ridge Golf Course in Austinburg.

The Eagles boys’ team of Brandon Dragon, Bryce Shahan, Caleb Nuggent and Kole Opalko came together to win the event with 335 strokes. Meanwhile, Nia Gribbons shot a career-best to win medalist honors in the girls’ tournament.

“We’ve had some lean years, so the kids were happy to get win today,” Geneva boys’ coach Zach Mansky said. “I was happy for them but we need to clean things as the (Chagrin Valley Conference) competition starts next week. Today should give them a lot of positives going forward.”

Madison finished second with 344 strokes while Edgewood was third with 351 and Perry finished fourth with 364. St. John (479) and Lakeside (492) rounded out the field.

Dragon finished third overall with a 79. Shahan carded an 81 and Nuggent and Opalko came in with an 87 and 88, respectively.

Devin Morrison also competed for the Eagles. He finished with an 89.

Chardon’s girls’ team finished in first place with 419 strokes but, thanks to Gribbons, Geneva was close behind with a 438.

“I was very excited to have gotten a 91,” she said. “I started off playing really great getting a par on the first hole I played. I was hoping to break 100 and coming out with a 91 was a huge surprise.”

For Gribbons, it was her second strong performance in a row as she shot a 116 to lead Geneva to the team title at the CVC preseason tournament on Monday at Punderson Golf Course.

“(The CVC tournament) was a great way to help me get prepared for today,” Gribbons said. “Punderson is a lot longer course than Maple Ridge and being able to get out and play before this 18-hole was helpful. I also got to play with the Perry girl I played with yesterday, so that was fun. Today helps my confidence by showing myself I am capable of shooting a low score. This will help me by setting my goals higher to keep improving throughout the season.”

Perry’s girls’ team finished third with 455 and Madison was fourth with 503.