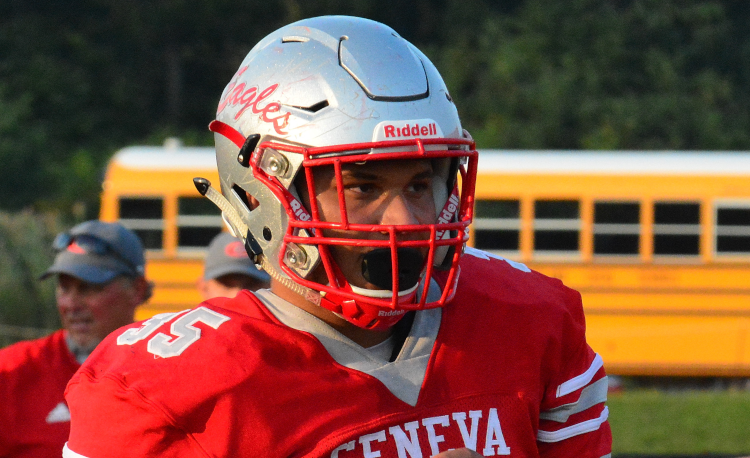 Charlie Taylor ran for 146 yards and three second-half touchdowns to lead Geneva to a 28-14 win at West Geauga on Friday.

With the win, the Eagles improved to 3-0 for the first time in over 20 years.

“It’s great to be 3-0 because we always had Kirtland sitting in that Week 3 slot so that’s what has been stopping us from getting to 3-0 lately,” Geneva coach Chip Sorber said. “It’s a great feeling though.”

After 24 minutes on Friday, neither the host Wolverines nor visiting Eagles had found the endzone.

“We eventually wore West G down in the second half,” Sorber said. “We moved the ball a little bit easier. They made a couple big plays as well.”

The Eagles mustered just 85 yards of offense in the first half but powered their way up and down the field in the final 24 minutes.

“They really had the ball the whole first half,” Sorber said of the Wolverines. “We lost the field position battle right from the get-go but our defense held and kept them out of the end zone. They got down a couple times close but came out empty.”

Taylor opened the second-half scoring with a 10-yard touchdown run but West Geauga responded with a touchdown pass to tie the score at 7-7.

Again, West Geauga responded with a touchdown pass to cut the Geneva lead to 21-14.

Ben Scibona, who finished with 97 yards on eight carries, gave the Eagles an insurance score when he ran it in from the six.

Geneva’s defense did the rest.

“The kids went out and battled hard,” Sorber said. “Not a lot of people gave us a lot of respect after graduating the group we did and we’re just proud that our kids are reloading instead of rebuilding. That’s kind of what we thought would happen. We had a lot of new faces but we thought they’d play the way we want our Geneva Eagle kids to play and they played the way we want them to play.”