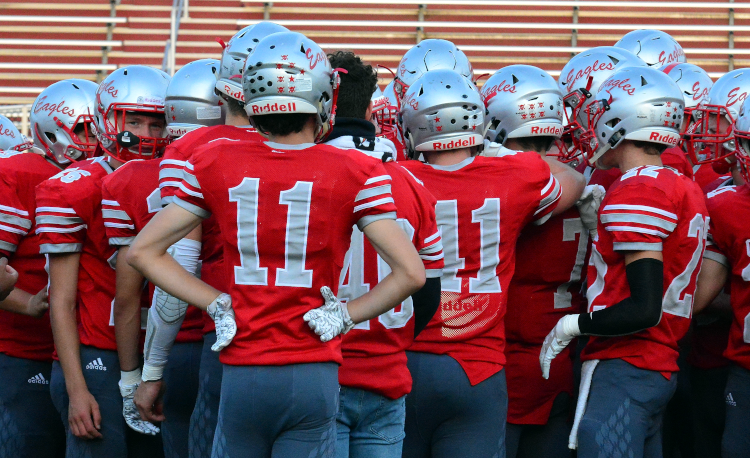 For many, that early success is long overdue.

With wins over Madison, Edgewood and West Geauga, Geneva is 3-0 for the first time in at least 20 years—long before they days statewide schedules were tracked on JoeEitel.com.

“It’s great to be 3-0 because we always had Kirtland sitting in that Week 3 slot so that’s what has been stopping us from getting to 3-0 lately,” Geneva coach Chip Sorber said. “It’s a great feeling though.”

Geneva opened the season with a 17-14 win over Madison then beat Edgewood in Week 2, 56-25. The Eagles were locked in a scoreless halftime tie at West Geauga on Friday before their strength and conditioning work paid off in the second half with a 28-14 victory.

“We eventually wore West G down in the second half,” Sorber said. “We moved the ball a little bit easier. They made a couple of big plays as well.”

The Badgers opened the season with a 27-21 overtime win against rival Cardinal and that set the tone for the next couple of weeks as Berkshire went on to beat Grand Valley, 34-6, and Lutheran West, 28-7.

“We haven’t really reflected on it much; we have kept the one week at a time mentality,” Berkshire coach Josh DeWeese said of the long-overdue 3-0 start. “It is confirmation of the off-season commitment and hours spent repping through the spring and summer.”

Chagrin Falls and Independence both have won three straight this season and are undefeated in Week 4 for the first time since 2012.

“I’m so proud of our players and coaches who have done an excellent job of adapting to a unique and shortened summer camp,” Chagrin Falls coach Mark Iammarino said. “It’s exciting to see them believing in themselves and their abilities. It’s a testament to their commitment and dedication in the off-season.”

Independence had to overcome a halftime deficit against Orange on Friday to extend their winning streak to three games this season.

The visiting Lions led 13-0 at the break before the Blue Devils reeled off 21 straight points to win.

In Week 1, Independence downed rival Cuyahoga Heights, 35-0, for the first time since 2013 and then cruised to a win at Cardinal.

While the 3-0 start isn’t something the Blue Devils spend much time thinking about, they are on track to achieve their goals.

“Truthfully, we haven’t talked about it,” Independence coach Rick Adams said about the 3-0 start. “It does feel good to know that the work the team has put in during the summer, along with blocking out the distractions of COVID to focus on football, is paying off.”

Kirtland and Wickliffe also are off to 3-0 starts but the Hornets went 15-0 last season on the way to winning a second straight title and Wickliffe last went 3-0 just two seasons ago.