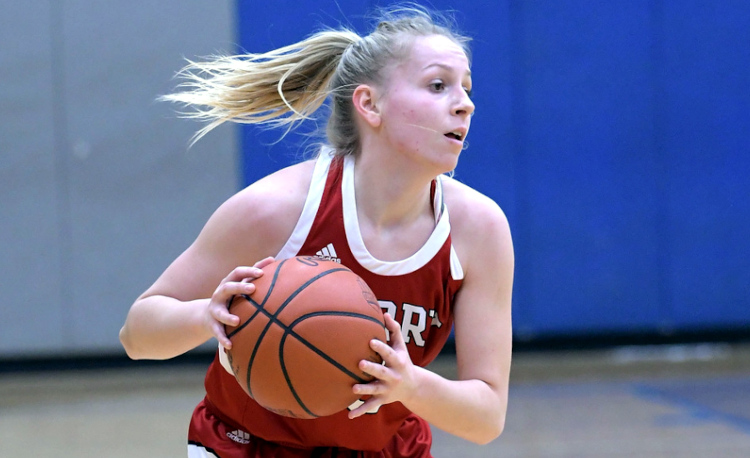 Madyson Hacking has drained a lot of big shots throughout her four-year career at Perry High School. The one she’ll remember most happened early in the second quarter of the Pirates’ 53-19 win over visiting Lakeview in a Division II sectional championship.

That shot had little to do with the outcome of the game, but it’s a shot Perry fans won’t soon forget as Hacking became the school’s all-time leading scorer.

“I’ve been very fortunate to have great teammates and great coaches to be able to get this amazing accomplishment,” Hacking said. “Becoming Perry’s girls’ new all-time leading scorer means a lot to me. It’s a testament to all the work that has gone into my game. Every coach, teammate, friends and family who have helped me to expand my game has led me to this accomplishment, especially my parents. They have put so much of their time into helping me improve my game. I will forever be grateful.”

Elle Infalvi pulled down an offensive rebound to set up Hacking’s historic layup.

“My teammates swung the ball to me in the left corner and I beat my girl baseline for a power slide for an open layup,” Hacking said. “It felt so great to sink that shot in finally, going all week knowing I only needed one bucket was a long week. After shooting the shot, I just felt a huge weight fall off my shoulders and I was able to just enjoy the moment. From that shot on, I couldn’t stop smiling.”

Hacking entered the game with 1,297 career points to her credit, just one behind Jackie Altenweg, who held the record with 1,298.

“I’m really happy for Madyson,” said Perry coach Roy Infalvi, Jr. “She is one of the hardest-working players I’ve ever coached. Every workout, every practice, every game, she goes full go. She’s earned every point. She plays just as hard, if not harder, on defense as she does on offense. She’s a special player and deserves this accomplishment.”

With 10 points in the win, Hacking now has scored 1,307 career points with at least one more opportunity to add to her total when the Pirates host Canton South in a district semifinal on Wednesday.