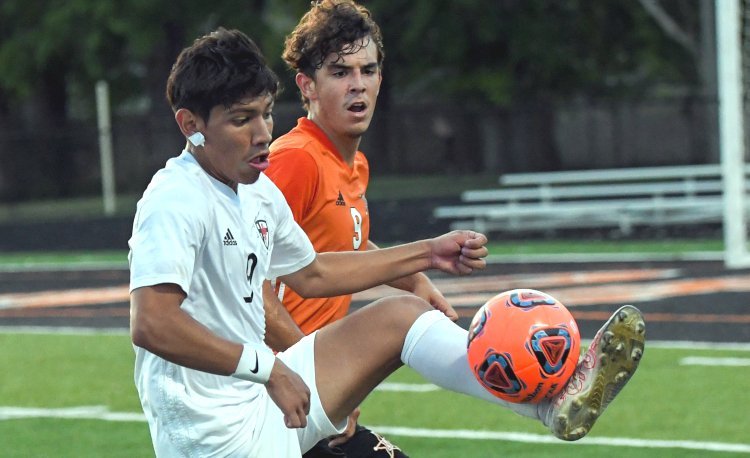 EASTLAKE—Harvey rode a two-goal performance from Kevin Fonseca to a 2-0 non-conference win over host North in a Friday Night Futbol game at Nick Carter Stadium.

Fonseca broke a scoreless tie when he punched in his own rebound with 13:15 remaining in the first half and then added a second goal when he outran the North defense and beat the Rangers’ keeper in a one-on-one situation with 14:28 remaining in the game.

“That was a huge win for them,” said Harvey coach Natalie Sisler of her Red Raiders. “I scheduled this game thinking we were going to be Division I and then we ended up dropping to Division II, but we were just going to roll with it anyway. It’s a great win because North is a great team and they have been a powerhouse for sure, and that showed, especially in the second half. This was a good confidence-builder for our team and I feel like all-around, it shows that we can compete against any team.”

The Red Raiders took control of the game early and dominated possession in the first half.

They used their speed and precision passing to create several scoring opportunities but the Red Raiders weren’t rewarded for their effort until Fonseca’s second-chance opportunity.

“In the beginning, it was tough,” Sisler said. “Anytime you’re right at the door knocking on it and it doesn’t go in it’s tough because everyone was so close. It took a while to get there but that’s the mental toughness we’ve talked about and not letting things like that get into your head and just stay focused on making sure we’re finishing. It was nice to see that we were able to put a couple in and finish when we needed to.”

Leading 1-0 at the half, the Red Raiders then fought off the Rangers in the second half.

North’s offense found its groove and lived in front of the Harvey net for much of the final 40 minutes but goalkeeper Adan Torres was up to the challenge.

He turned away seven North shot attempts, including several at point-blank range.

“In the second half, we came out a little flat and it was good to see that our defenders and Adan back in the goal were able to keep us in the game,” Sisler said. “It was nice to get that second goal on a quick counter. That definitely helped us be able to relax a little bit. Hopefully, in the next game, we’ll be able to come out in the second half a little bit stronger like we did in the first half.”

Elian Bustos recorded an assist in the win.