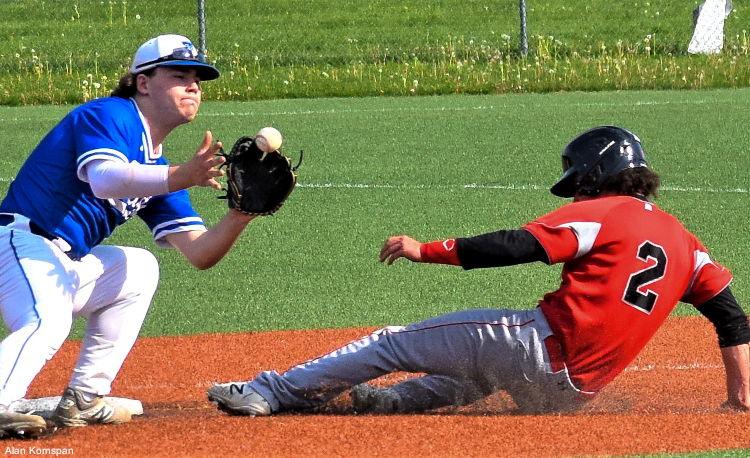 GATES MILLS–Hawken scored six runs in the final two innings to pull away from visiting Trinity in a Division III sectional final on Wednesday, 11-5.

The fourth-seeded Hawks moved on to the Copley District where they’ll play No. 5 Gilmour Academy in a semifinal on Monday.

Hawken scored two runs in the bottom of the first when Zach Miller singled with one out and Dominic Brancel and Nick Bollinger both drew two-out walks to load the bases. Tommy Clark then earned an RBI the easy way when he walked home a run. Brancel scored on a wild pitch to make it 2-0.

The Trojans responded with five runs in the second.

Merrell Sheehan drew a leadoff walk, Brody Tancak-Peshek singled, and Jack Peters reached on an error to load the bases. Ryan Trent walked home the first run and Luke McKiernan was hit by a pitch to tie the game at 2-2. Michael Clancy singled home a run and, following a double play, Matt Trimble hit a two-RBI double that left Trinity in the lead, 5-2.

Trinity’s lead was short-lived as the Hawks scored three in the bottom half of the inning to tie the game at 5-5.

Devin Anthony, Bollinger, Clark, and James Ciofani all singled in the inning for the Hawks.

Brancel singled to start Hawken’s fifth-inning rally. Bollinger then walked and Clark reached on an error that gave Hawken a 6-5 lead. Jalen Suggs made it 7-5 when he hit into a fielder’s choice and Ciofani followed with a single to put runners at the corners. Ryan McMullen hit a sacrifice fly that gave the Hawks a three-run cushion.

Hawken added three more in the sixth on doubles by Anthony and Bollinger and singles from Brancel and Ciofani.

Eli Thompson earned the pitching victory after he allowed one earned run on five hits with five strikeouts.

Ciofani led the Hawks at the plate as he finished 3-for-4 with a pair of RBI. Anthony, Brancel, and Bollinger each finished with two hits for the Hawks. Bollinger led the team with three RBI.

Clancy and Tancak-Peshek both finished the game with two hits for the Trojans.