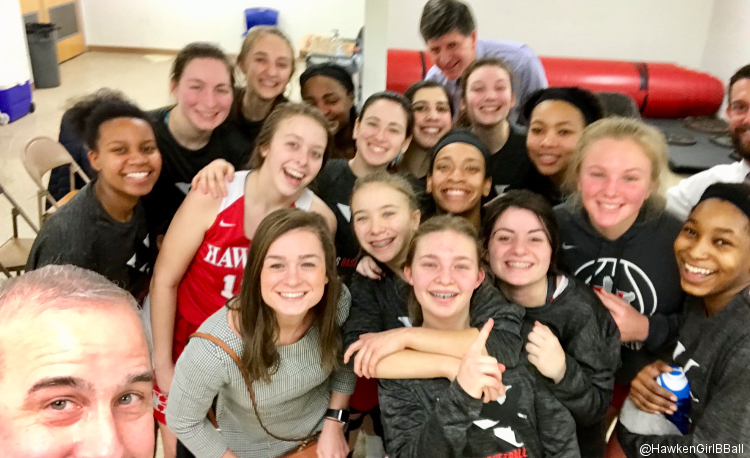 As the No. 9 seed in the Division II Lakeside District tournament, Hawken technically was the underdog in Saturday’s sectional semifinal at No. 8 Glenville.

The Hawks quickly disproved that seeding arrangement as they defeated their hosts, 67-29.

“We had a great week of practice and we were able to carry it over to this afternoon,” Hawken coach David Murray said. “I felt like we came out with a lot of energy and were able to couple that with sharp execution. As a team, we did a really nice job of handling their full-court pressure and turning it into transition opportunities for us on the offensive end.”

Hawken opened the game on an 18-5 run and started the second half with a 20-7 advantage to keep the Tarblooders from mounting any type of comeback bid.

“That was really big for us,” Murray said of the fast start to the first quarter and second half. “Especially coming out in the second half, we wanted to take advantage of the opportunity to seize control of the game. At halftime, we emphasized being sharp and composed on offense, while stressing the importance of maintaining a high level of energy on defense. I thought that our girls did a great job of playing each possession versus playing the scoreboard.”

Taylor Smith led the Hawks with a game-high 18 points while Makayla White and Zaria Johnson also scored in double figures with 17 and 12, respectively.

Julianna Pollard contributed to the win with seven points, Erica Emig added five, Gabi Cicerini pitched in with four and Maya Dori and Rosie Murray each finished with two points for the Hawks.

“We’re blessed to have some very talented and athletic girls in our program,” Coach Murray said. “I thought that we did a nice job of moving the ball and passing up on good shots for great shots. Overall, I was proud of our offensive balance. We were able to turn their pressure into transition opportunities and execute in the half-court.”

Hawken improved to 9-14 overall and will play at top-seeded Perry in a sectional championship game on Thursday.

“I’m very proud of all of our girls,” Murray said. “We have a lot of young players, so it means a lot to be able to go on the road as the underdog and pick up a convincing win.”