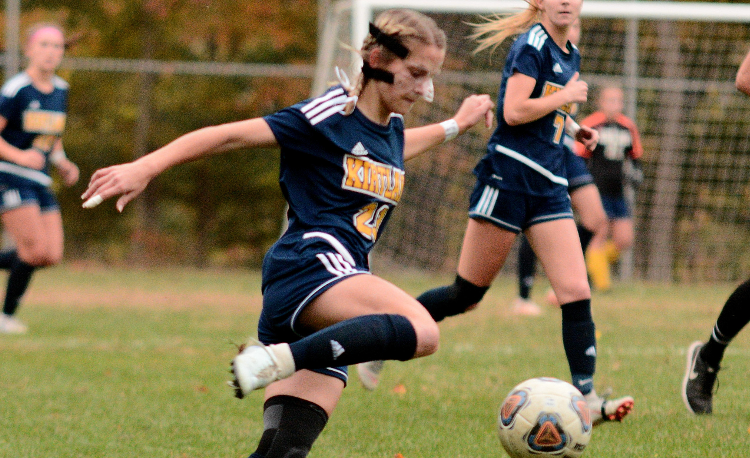 Erika Zschuppe scored two goals and Kirtland’s defense recorded its ninth shutout of the season in a 2-0 win over Doylestown Chippewa in a Division III, Region 9 semifinal at Medina on Tuesday.

“I thought we played a very smart game against Chippewa,” Kirtland coach Ed Bradac said. “We wanted to keep possession and defend as 11 and we did that tonight.”

The win over the Chips was the second straight for the Hornets after dropping a 1-0 decision to Chippewa in the 2015 state semifinals. Kirtland beat Chippewa in last year’s regional final, 3-2.

Zschuppe’s 33rd goal of the season gave the Hornets a 1-0 lead with 12 minutes left in the first half. She added a second in the second half to close out the scoring.

“I received the ball, turned on the defender, made a couple cuts to throw her off, saw an opening and I just ripped the ball,” Zschuppe said. “My second goal was scored from a breakaway. I won the ball at the half, no one was on me, so I started dribbling. I broke through the defense, looked up, and placed the ball on the side netting.”

Maya Zovko nearly made it 3-0 but her shot bounced off the crossbar and dropped near the goal line but the line judge ruled the ball was still in play.

“It is really exciting, but there is a lot of pressure on me when it comes to these big games,” Zschuppe said of delivering the game-winning goals for the Hornets. “Not only for me but for everyone else who plays. Even when I am man-marked, we find a way to play around it, and still manage to score goals.”

With a 2-0 lead, Kirtland’s defense did the rest.

The Hornets outshot the Chips, 19-6, and attempted seven corner kicks to just one for Chippewa.

The Hornets will attempt to reach the state Final Four for the third straight time. To get there, they’ll have to beat a familiar foe in Chagrin Valley Conference rival Independence.

Saturday’s regional championship game will be played at a time and place to be determined. The Hornets defeated the Blue Devils 3-1 on Aug. 27.

“We are very focused (and take) each game (one) at a time,” Zschuppe said. “We come prepared to practice, wherever that may be, and we work hard. We practice like we play, and it shows in a big game like this.”