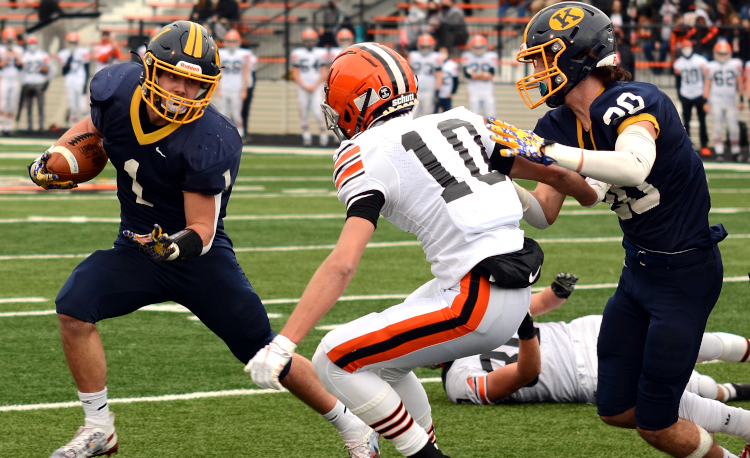 MASSILLON—Depending on the perspective, Kirtland’s state championship game rematch with Ironton was a dud.

The Hornets, who beat Ironton for the 2019 Division V state title, 17-7, dominated the second half on Saturday on the way to a 38-0 pounding of the Tigers.

“We played our best in all three phases,” Kirtland coach Tiger LaVerde said. “We made a field goal, all our extra points, our punt team, special teams, offense, defense, we finally put it together.”

From the Kirtland perspective, a highly anticipated game turned into a Hornet rout and from Ironton’s perspective, it wasn’t supposed to go that way.

The Tigers entered the game 11-0 with vengeance on their mind. For most of the first half, it looked like Kirtland vs. Ironton Part II was going to live up to its billing.

Both teams punted on their first offensive possessions of the game and after holding the Tigers on a 4th-and-1 at their own 29, the Hornets drove to the Tiger 13, where they settled for a 30-yard Mario Rodin field goal.

Ironton picked up a pair of first downs on its ensuing possession but again the Kirtland defense held and forced a punt.

The Hornets drove to the Tiger 34, where they faced a 3rd-and-7.

Liam Powers, who completed 9-of-14 passes for 94 yards, connected with Joey Grazia along the sideline for a 23-yard gain. The catch originally was ruled incomplete but after an instant replay review, the call was overturned as Grazia had tapped his toe in bounds while hauling in the ball with his right hand.

Four plays later, Powers dove into the end zone from one yard out to push Kirtland’s lead to 10-0.

Kirtland owned the second half.

Kirtland’s defense forced another Ironton punt and Anthony DeMarco ran for an 8-yard touchdown to increase Kirtland’s lead to 31-0 with 4:55 left in the third quarter.

Danny Davidson closed out the scoring with an 18-yard touchdown reception.

“I don’t know that they could have played much better,” LaVerde said. “Defensively, offensively, we missed a couple of open guys in play-action early in the game but that catch by Grazia and that score, 10-0 coming out in the second half, that first drive to get to 17 and they fumbled and we scored right away. 24-0, that was a big momentum switch. Mason had that run to make it 17-0, I think he put his hand down about five times. That was an incredibly athletic run.”

Mason Sullivan ran for a game-high 129 yards on 19 carries.

The Hornets outgained the Tigers, 408-58. Kirtland allowed just seven yards of offense in the second half.

Ironton had just four second-half drives that resulted in two fumbles lost, an interception and a punt while Kirtland scored on four of its five offensive possessions and ran out the clock on its last drive.

“They had six or seven Division I kids and we held them to 50 yards and we had over 400 yards,” LaVerde said. “We have some good players. Mason and Gage are very good. Joey Grazia is extremely good. They do everything you ask them to do as a coach. It says it’s about team. It’s about the kids loving each other, growing up together in elementary school and working hard for each other.”

The game ended with Schwartz dragging three Ironton defenders on the way to an 11-yard run.

That individual effort from Schwartz summed up Kirtland’s performance as a team. The Hornets refused to lose.

“Every play, they do their best from the first play to the last play,” LaVerde said. “That’s kind of their thing and they try not to get worn down and they didn’t tonight. We made the plays when we’ve had to.”

With the win, Kirtland collected its sixth state championship in 10 years and extended its winning streak to 41 games.

As always, the Hornets won’t waste any time preparing for next season even if they won’t focus on the streaks.

“Those kids that are going to be playing next year, they’ll be in (on Sunday),” LaVerde said. “They’ll be doing what they’ve got to do in the offseason. We’re not even going to bring that up. I don’t know who we play Week 1 next year but that will be our focus. If you think about those other things, then it never happens; it doesn’t happen. You’ve got to think about what you’ve got to do that day to make yourself a better player.”