Hornets down the Rockets in state semifinal 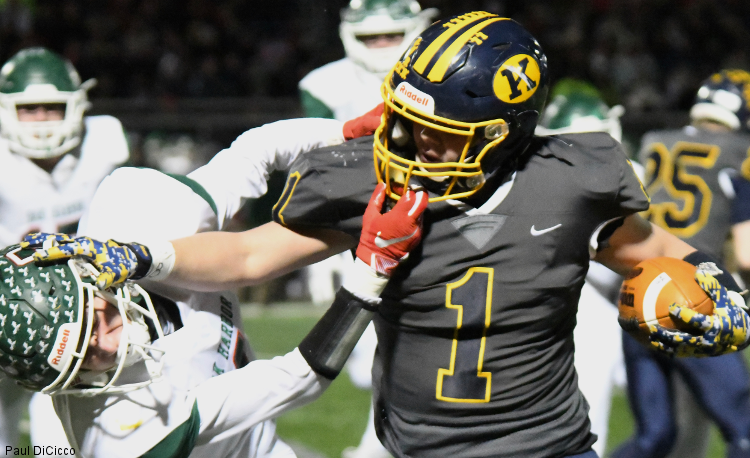 STRONGSVILLE, Ohio—Facing an undefeated team that was in the habit of blowing out its opponents, the Kirtland Hornets did what they do best.

Forcing three turnovers and scoring once in each quarter, Kirtland ran all over Oak Harbor, 28-14, Saturday at Strongsville High School to earn a berth in the Division V state title game. The 14-0 Hornets face Ironton at 8 p.m. Dec. 7 at Canton’s Tom Benson Hall of Fame Stadium. Ironton defeated West Jefferson in the other semifinal, 49-21.

“These guys love each other, and they believe in each other,” Kirtland coach Tiger LaVerde said. “They have 100-percent belief that they can beat anybody, and they just go out and relax and play their game.”

Kirtland, the defending Division VI champions, will be playing for its fifth state crown, but its first in Division V. The Hornets will also attempt to win a title in consecutive years for the first time, having previously won in 2011, 2013, 2015 and 2018.

Nothing seems to phase this team, not even moving up to Division V.

“We’ve seen bigger schools, tougher teams,” LaVerde said. “Sandy Valley was a great team, Manchester was a great team, South Range is a great program. Oak Harbor, they whipped everybody. I don’t think they had a close game all year. We played four really good football teams these past four weeks and that’s the way it should be.”

Kirtland also wasn’t bothered by the fact that Oak Harbor possessed a dominant offense, led by quarterback Jac Alexander and running back Clay Schulte. Alexander hadn’t thrown an interception all year until meeting the Hornets, who had two interceptions and also a fumble recovery. Schulte was held to 17 yards on 10 carries and the Rockets only had 71 rushing yards for the game.

“We just knew we had to stop them if we wanted to win the game,” said senior linebacker Louie Loncar. “Defense wins championships and that’s what we’re trying to do here. We go one game at a time, and we take care of business and our offense takes care of business.”

Perhaps the most important play of the game came with 9 minutes, 22 seconds to play, when Kirtland defensive back Joey Grazia stepped in front of Oak Harbor receiver Tyler May for the interception. The junior returned the ball 30 yards for a touchdown, for all intents and purposes putting the game out of reach at 28-7.

“Coming in, we knew (Alexander) put the ball on the money,” Grazia said. “So, we knew we had to tighten up our coverage and play great defense. That kid ran a fade route all game. I knew I had the speed to stay with him, so anything he played short, I knew I could play aggressively. I saw the quarterback eye him up before the play, and then I made a break on the ball and made a great play.”

The Hornets never trailed, but they also never felt secure until Grazia’s pick-six. Kirtland opened a 14-0 lead in a dominant first half as Mason Sullivan ran in two short scoring runs. However, the Rockets made a game of it by roaring down the field late in the second quarter, covering 77 yards in just 1:08, as Schulte ran it in from the 1 with 24 seconds remaining.

But never fear, Luke Gardner is here. On the opening play of the second half, Mason Sullivan ran for 23 yards to put the ball on the Oak Harbor 42. On the very next play, Gardner took off on a jet sweep to the left and didn’t stop until he had reached the end zone.

“We kind of dominated the whole first half until those last three plays,” LaVerde said. “I thought we dominated and then we let them back in the game. So, to get that score in the beginning of the third quarter was very important.”

Kirtland maintained its lead by playing solid defense and running the ball. The Hornets rushed for 293 yards, with Gardner gaining 127 yards on 18 attempts, and Sullivan adding 103 yards on 22 carries. They only attempted three passes, with Liam Powers connecting on two of them for 14 yards.

Thus, it was all about running the ball, maintaining control of the ball, and playing solid defense—all things that Kirtland knows well and does well.

“The difference, I believe, was our experience and our hard work in the off-season,” Gardner said. “We did a lot of work to get ready for moments like this.”