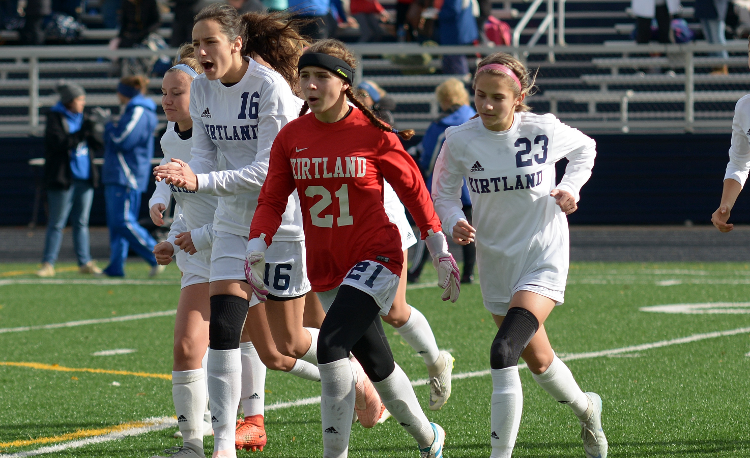 The Hornets, who also won the Chagrin Valley Conference Chagrin Division title for the first time, have the potential to repeat as league champs and could put together another deep postseason run.

“I believe that we have a group that can make another deep run in the state playoffs and ultimately make a return trip to Columbus,” 15th-year head coach Ed Bradac said. “(We have to) avoid any major injuries and develop team chemistry with several new players and positional changes.”

Zovko, a senior, scored nine goals and assisted on 23 others as she went on to earn first-team All-Ohio, Greater Cleveland and News-Herald Player of the year honors and she also was named to the USCA Central Regional Team.

“Maya is truly a special player,” Bradac said. “She has positioned herself to have an amazing senior year. As a team, you want your best player to have the greatest work ethic and that is exactly what we have in Maya. ‘Nothing is given, everything is earned,’ would be a quote I would use to describe Maya.”

“One word to describe Lidia is graceful,” Bradac said. “She is so deceptive. One minute you think you have her and the next minute she is gone. Her speed and foot skills make her a threat to score anytime she has the ball at her feet.”

Zschuppe turned in a remarkable freshman season as she found the back of the net 33 times and assisted on five goals on the way to being named the MVP of the CVC as well as a first-team all-league honoree, first-team All-Greater Cleveland and first-team All-News Herald. She also was named second-team All-Ohio.

“Erika is a gifted soccer player and I’m not sure that we have seen her best soccer yet,” Bradac said. “The things that she can do both on and off of the ball make her one of the most dangerous players in the state.”

“Lilia had an interrupted junior year due to an injury. This year that is all behind her and she has proven to be a force during our summer league and early scrimmages,” Bradac said. “Her soccer IQ is tremendous. She is a vocal and compassionate leader both on and off of the field.”

Petric and Yurick will provide a formidable wall between Kirtland’s goal and opposing offensive players.

“Tea will anchor our defense this year. She is a very calming force on our backline. (She has) tremendous foot skills and does a great job reading the game,” Bradac said. “(Yurick) came into this year healthy and because of that is in the best shape of her life. She will play a key role this year if we are to get back to Columbus. Amber is a physical presence and is that player who invites contact and thrives in that environment.”

Piazza should continue in her role as a shutdown defender.

“Gabby will take on the role of covering our opponent’s best attacker,” Bradac said. “Defensively, she is solid. Last year, I could count on my one hand how many times she was beaten; it just did not happen.”

“Corinne has developed into one of the best goalkeepers in our area,” Bradac said. “Her performance last year in the state finals game was outstanding and because of that performance she enters this year with a tremendous amount of confidence.”

Junior midfielder Aria Evans-Roskos should provide an immediate impact for the Hornets in her first season with the squad.

“We have not found anything that Aria can’t do,” Bradac said. “The things she can do with a soccer ball make her a standout player. She is a great addition to a very talented team. She makes everyone around her look better due to her vision and knowledge of the game.”

Kirtland’s path to MAPFRE Stadium is a bit different this fall as the Hornets were moved from the Elyria District into the Chagrin District with league rivals Berkshire, Cardinal and Grand Valley, and a host of schools from the Northeastern part of the state.