Hornets hold on for five-set win at Cardinal 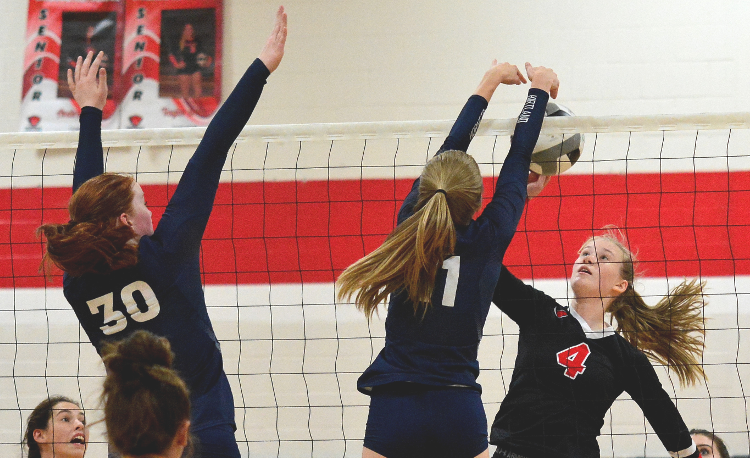 MIDDLEFIELD—Inspired by the preseason rankings, Kirtland traveled to Cardinal with the intention of upsetting the defending Chagrin Valley Conference Valley Division Huskies.

The Hornets, who were ranked fourth in the preseason poll, ran out to a 2-0 lead then fought off the Huskies to win 3-2.

“We’ve been looking forward to this,” Kirtland coach Arlanyna Newcomer said. “We saw the rankings and saw that we were fourth and that lit a fire. We were excited to play all the teams above us because we know we have a lot to offer. It’s really cool to show how talented we are and the teams that are good, these are my favorite games. It’s a little stressful sometimes but they’re the best ones.”

Cardinal was voted in the preseason poll as the favorite to win the league. Grand Valley was second and Berkshire was third.

Kirtland has now won at both Cardinal and Berkshire and took Grand Valley to five sets on the Mustangs’ home court.

The Hornets will have home-court advantage when they see those three teams again later this season.

“It feels great,” Newcomer said about the Hornets’ position. “We’re doing a lot of different things in this program this year. I said it before and I’ll say it again, these girls work so hard and they deserve it. They put in the time and the work and it’s good to see it come to fruition. I’m excited to play all these teams again.”

The Hornets nearly finished off the Huskies in three straight sets.

They won the first two games, 25-18 and 26-24, and held a 24-18 lead in the third set. That’s when Cardinal rallied to prevent the Hornets from earning a fourth-straight sweep.

“It didn’t go our way tonight, but I truly believe tonight was anybody’s game,” Cardinal coach Karisca Chambers said. “I’m proud of the way that we were able to pick ourselves up when things were not going well. That’s the thing about this team; we have very good energy. I’m super excited we get to play these teams again later in the season. My girls are hungry and we will come out ready the next time we play them.”

Kirtland scored the first eight points of the fifth set and went on to win 15-7. With the victory, the Hornets beat Valley Division powers Berkshire and Cardinal in the same season for the first time since 2011.

“We didn’t even come out too bad in the third game, we just kind of let up,” Newcomer said about the Cardinal surge. “We started to take it a little less serious and it showed. We let up a little bit and that’s something we need to work on but they have what it takes to win this conference. It’s whether we show it or not but they have resilience.”

Kirtland’s only loss of the season—that 3-2 setback at Grand Valley on Aug. 22—played out very similarly to what happened on Thursday.

The Hornets took the early momentum with a win in the first set then gave up the next two. They won the fourth to force a fifth-set but came up short, 15-13.

That loss helped the Hornets refocus against the Huskies.

“I go back to that Grand Valley loss because it’s almost the same thing,” Newcomer said. “We started on top and then we let down and then it was a bad upset. I think they felt that loss and they didn’t want to feel it again.”

Cardinal also had a sense of déjà vu after losing at Wickliffe in five sets on Tuesday. The Huskies also played without standout Andrea Mack.

“This was a tough one tonight,” Chambers said. “Not having one of your starters, who is a senior and a captain, will always be difficult. You’re losing a part of your team chemistry. However, I think the girls stepped it up tonight. We did a good job at battling and fighting during those long rallies. We never gave up. It was game point in the third set and we fought back and won. That was huge for us and a turning point in the game.”