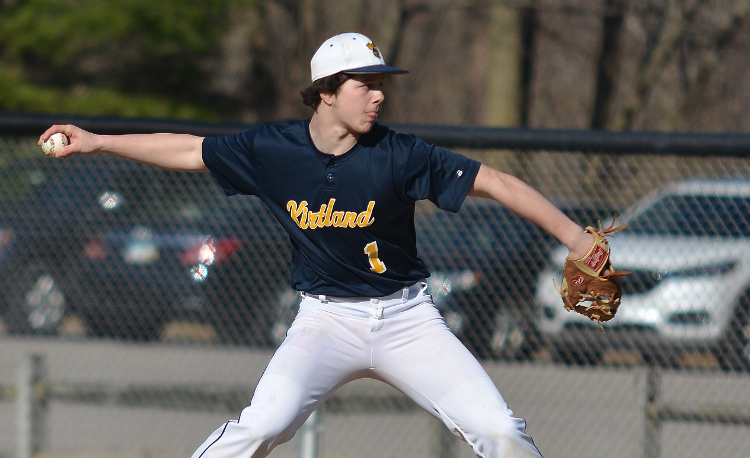 Mason Sullivan pitched a complete game shutout and knocked in two runs to lead Kirtland to a 3-0 win over visiting Trinity in a Division III sectional championship game on Wednesday at Recreation Park.

With the win, the Hornets avoided a letdown after Tuesday’s 5-0 win over Cuyahoga Heights that clinched the Chagrin Valley Conference Valley Division title.

“Coming into the second of back-to-back big games is always tough,” Kirtland coach Luke Smrdel said. “We won the conference yesterday and we knew it would be a battle again today to win the sectional. We had a little bit of a let down from yesterday, but we did enough to win. That’s our tournament mindset, survive and advance.”

Sullivan allowed just five hits and struck out five in picking up his fifth win of the season.

“Mason does his thing out there on the mound,” Smrdel said. “He’s got great composure, pounds the zone, and fields his position very well. He’s gotten better every start this year and we’re very happy about how he’s done so far.”

Sullivan also generated all the offense the Hornets would need with a two-run single in the bottom of the third inning.

Joey Torok, who finished the game 2-for-3, singled to start the rally and Joey Mongelluzzi and Seann McGill both were hit by a pitch to load the bases with no outs.

Sullivan stepped up to the plate and delivered with a two-run single.

“He’s not only one of our top pitchers, but he’s also one of our top hitters,” Smrdel said. “I look at him as a five-tool player for us, which is very rare to find in high school baseball.”

Jayme Torok doubled and scored on Andrew DeMarco’s fielder’s choice in the sixth.

The top-seeded Hornets advanced to play No. 4 Crestwood at Lakewood High School on May 20 at 4:30 p.m.

“We’re very excited to make it back to Lakewood for the third year in a row,” Smrdel said. “We have a very good opponent in Monday’s matchup. They came out and beat us earlier in the year. Hopefully, we have improved enough so we can flip the table on them this time out.”