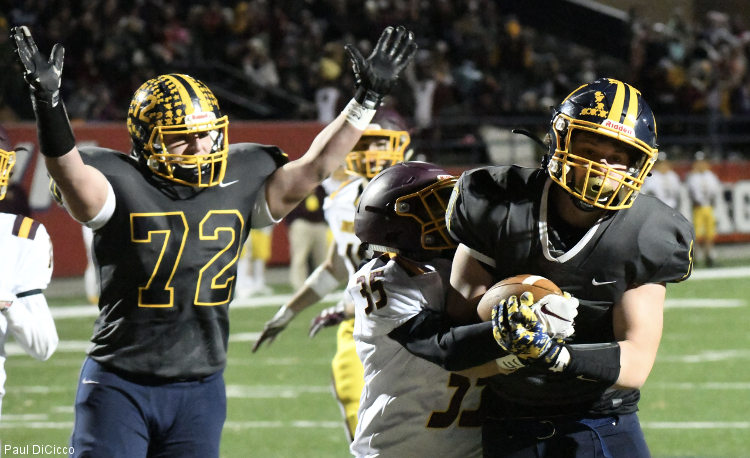 The Hornets used a punishing running game and a dominant defense to advance to a 10th straight regional championship game and an 11th Week 13 game in the last 12 years.

“The team was extremely focused,” said Kirtland senior Luke Gardner, who scored four touchdowns and led the Hornets with 191 rushing yards on just 19 carries. “We knew what we had to get done and we played great all around.”

Mason Sullivan also ran for over 100 yards in the win as he rushed 25 times for 157 yards and one touchdown as the Hornets outgained the Raiders, 386-129, with 342 of those yards coming on the ground.

Gardner opened the game with a 59-yard touchdown run and added a 12-yarder later in the first quarter as the Hornets built a 14-0 lead.

They needed that quick start after last week’s narrow win over Sandy Valley.

“The line did an amazing job for me to open some massive holes,” Gardner said. “I knew that we needed to score fast and the line did a great job helping out on that. They were amazing just like they always are. Without them, nothing that we do will ever work.”

South Range scored the only points of the second quarter to pull to within 14-7 at the break.

The Hornets dominated the second half.

They scored touchdowns on four of their five second-half possessions—with the only miss the result of a fumble at the Raider 8—and didn’t allow the Raiders to pick up a first down in the final 24 minutes of play.

“Defensively we got faster as the game went on, and we wore on them a little bit down the stretch,” Kirtland coach Tiger LaVerde said. “What a great half; mistake-free football, we ran the ball well, completed a big pass to Gage Sullivan, and the defense played lights out in the second half.”

That pass to Sullivan, a 30-yarder from Liam Powers on the second play of the third quarter, set up Mason Sullivan’s 8-yard touchdown run that pushed the Kirtland lead 21-7.

Louie Loncar then recovered a South Range fumble at the Raider 35 but Kirtland followed suit and turned the ball over to the Raiders at their own five.

Kirtland’s defense held and Gardner ran for a 23-yard touchdown to push the lead to 28-7 then closed out the scoring with a two-yard run early in the fourth quarter.

“We had some guys banged up and our depth really helped showed tonight,” Gardner said. “From the D-line to the backers and the DBs, all played amazing. It was a great all-around win tonight.”

Kirtland will play Akron Manchester in a regional championship game on Saturday at a location to be determined.