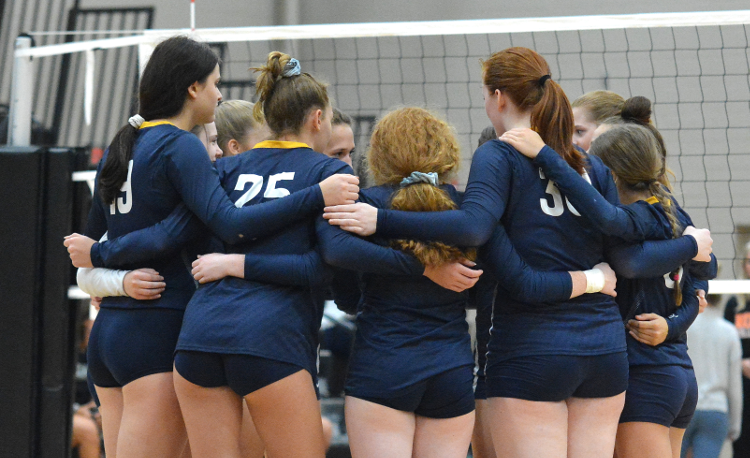 The Hornets circled the rematch with the Mustangs on their schedule and on Tuesday they went out and avenged that loss with a 3-1 win that left both teams tied for first place in the Valley Division.

“It’s a big win for us,” Kirtland coach Arlayna Newcomer said. “The way we played tonight is just another testament to what we are capable of.”

“This win was really big for me personally because I put it all out on the court and just played my hardest knowing that I’m not going to get another chance like this again,” said senior Abby Ruckel, who finished with 25 assists, eight kills, four aces and seven digs. “It was all about redemption for us and I feel like we really wanted to make a statement to show the hard work we have put in this season. It was a really fun game to play tonight because we put it all out on the line.”

In the first meeting, Kirtland won the first set and was on the verge of winning the second before the Mustangs rallied to tie the match. Grand Valley went on to win the third and fifth sets to close out that match.

“I think the big difference between then and now is our confidence,” Newcomer said. “Tonight, we played to win and our confidence drove us there. I’m really excited with the way we played tonight. The girls did such a good job battling in the times that were tough and stayed consistent throughout the night.”

The Hornets improved to 9-3 overall and 5-1 in league play.

“I really think it came down to our team chemistry,” Ruckel said. “We have just been becoming stronger and stronger. We definitely had a lot more nerves the first time we played them, but tonight we tried to keep our cool and play our game. We knew this was our last shot at being at the top. It was one of the more important games for us for sure.”