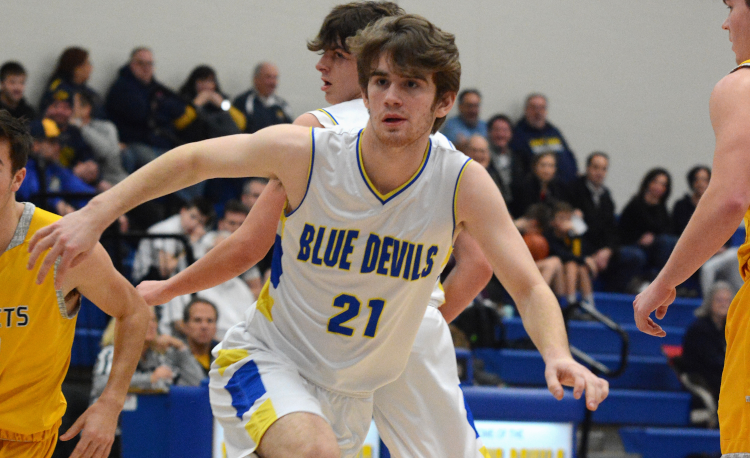 Over the course of the next couple of weeks, as the basketball season progresses through the postseason, coaches will often talk about the goal of surviving and advancing in the tournament.

In Independence’s case, the 14-5 Blue Devils were relieved to survive in a 58-50 win over two-win Brooklyn on Tuesday.

“We didn’t deserve to win that game,” Independence coach Kyle Johnson said. “They outplayed us. We were lucky enough to win the game tonight. They outplayed us in every facet of the basketball game.”

Independence opened the game with a 13-6 lead after one and the Blue Devils took a 31-21 lead into the break.

As they have done several times this season, the Blue Devils lost focus in the third quarter and Brooklyn took advantage to cut its deficit to 40-39 heading into the fourth.

The Hurricanes drained three 3-pointers in outscoring the Blue Devils in the third quarter, 18-9.

The good news for Johnson and Independence is the fact the Blue Devils have been able to minimize the damage during their lulls in the action and have finished off games with the momentum on their side.

“I will say we’ve been able to close out games even if we have played a bad three quarters,” Johnson said. “We have found ways to win, so that is a positive out of the past few games.”

The Blue Devils close out the year on Friday against visiting Berkshire followed by a two-week break before their first postseason contest.

“Our last regular-season game is Friday and then we have two weeks off,” Johnson said. “The next couple of practices, we’re going to have to get after it and I have to do a better job to get us prepared to be ready for games.”

Jaiden Basinger led Brooklyn with a game-high 20 points and Maceo Pytel added 10 for the Hurricanes.