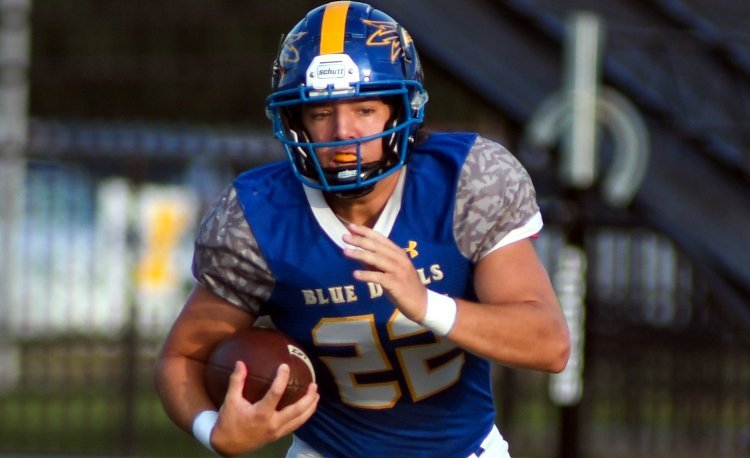 With the victory in the Battle of the Blue Devils, Independence moves to 3-5 overall and 1-2 in league play.

Corrigan’s dominant running performance early in the game sealed the victory for Independence. He scored on touchdown runs of 70, 60, and 42 yards within the first 14 minutes of the game.

“We practiced really well,” Corrigan said. “Our offense was really on point this week. We fixed a couple of things blocking and I just hit the holes. I had really good blocks downfield from our wide receivers.”

For the game, Corrigan carried the ball five times for 177 yards and scored three touchdowns averaging 35.4 yards per carry.

Also, contributing greatly to the Independence offense was senior Max Tarnowski who caught a 95-yard touchdown pass from sophomore quarterback Dominic Narduzzi to put Independence up 28-0 going into halftime.

“It was just a good play call, I was wide open,” Tarnowski said. “Dom just threw a good ball and all I had to do was run to the end zone and just hope I didn’t get caught.”

Tarnowski added a 55-yard touchdown catch in the second half and finished the game with three receptions for 159 yards and two scores.

The Blue Devils racked up 386 yards of offense while holding Wickliffe to 123.

Narduzzi completed 5-of-8 passes for 170 yards with two touchdowns.

Vincent Gargiulo led Wickliffe with 79 rushing yards on 19 carries and he added two receptions for 30 yards. Frankie Bucar completed 3-of-5 passes for 33 yards and he ran for a one-yard touchdown to help Wickliffe avoid the shutout.

Independence travels to Lutheran West on Friday while Wickliffe visits Trinity on Saturday.