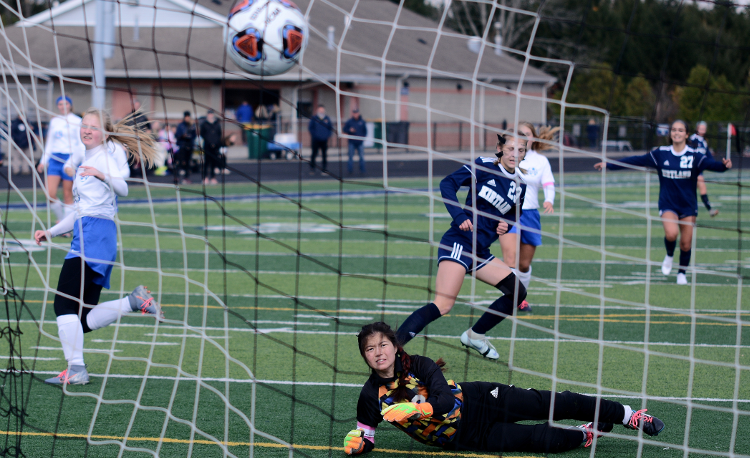 TWINSBURG—Erika Zschuppe scored two goals and added an assist to lead Kirtland to a 4-0 win over league rival Independence in a Division III regional championship game at Tiger Stadium on Saturday.

With the win, the Hornets advanced to the state Final Four for the third consecutive season and fourth time in five years.

“I thought coming into the game we felt we were the better team based off of playing them earlier in the season and the schedule we played to prepare us for a game like today,” Kirtland coach Ed Bradac said. “Not taking anything for granted or taking Independence lightly, but we went back and looked at the first game we played and we didn’t have Lidia Rodin in the back and we had Maya (Zovko) playing on the outside right in a midfield position. We had people playing in different positions so we had a lot of confidence coming into today, without a doubt.”

Since then, the Hornets moved Rodin to the sweeper position which has bolstered the defense.

“This was our fifth (playoff) game and in these five games we have given up one goal but we haven’t given up any goals against our starters,” Bradac said. “That’s where it starts, with our defense because defense is always going to win games. What’s kind of pulling it all together is Lidia Rodin. She has played absolutely outstanding and the girls know it. The girls see it. She’s got that it factor for us. She’s been amazing.”

Rodin is a big part of Kirtland’s success but she has plenty of support from keeper Corinne Aquila and the rest of the Hornets responsible for protecting the net.

“I think we play well collectively, it’s not just five in the back,” Bradac said of Kirtland’s defensive effort. “It is literally all 11 of us playing defense from any point on the field. So much gets overlooked sometimes but Corinne Aquila is one of the best keepers in the area and Gabby Piazza just does everything right. Corinne Greenlee as a freshman has fit in so well with those girls. Amber (Yurick) does an amazing job winning balls in the air.”

The Hornets, who improved to 17-4, are just as effective on the offensive side of the field.

Zschuppe broke the scoreless tie off an assist from Aria Evans-Roskos with 23:41 left in the first half. She added a second goal seven minutes later off a Zovko touch.

“Erika is a unique talent,” Bradac said of Zschuppe, who leads the Hornets with 34 goals. “She has speed and a drive to her. The other thing about Erika, we’re finding it’s important for her to get touches. We’re not just going to leave her up top. We’re going to pull her into the midfield and then move Maya up top where maybe we get a little more movement out of Maya. It’s such a nice thing to be able to move them around. It’s a luxury to have.”

Tea Petric made it 3-0 with 38:58 left in the game when she tapped in a Zovko pass through the middle and Evans-Roskos closed out the scoring at the 30-minute mark off an assist from Zschuppe.

Independence closed out its dream season with a 14-4-3 record.

The Blue Devils set a school record for wins in a single season and won the first district title in school history.

“I am so proud of what this team accomplished this season,” Independence coach Bryan Less said. “We went from never winning a thing to getting three trophies. We also broke the school record for wins and were a Brecksville blowout from the record for goals against. Without a true standout player, we really had to play as a single unit to achieve success.”

Independence had allowed just one goal in four playoff games leading into Saturday’s matchup with the Hornets.

“Kirtland played so well today that there was not much else we could have done against them,” Less said. “We made some mistakes, but they were definitely the better team today. Molly (Dougherty) and Riccela (DiGeronimo) did what they could against a very stout defense and Alex (Adams) and Erin (Zygmunt) both ended the game with swollen knees from their tough center mid play. Reni (Kaiser) had a bunch of saves, but two plays in the first half really helped seal the game when we lost track of Zschuppe. Other than that, we played too much kickball, but the effort and intensity were there.”