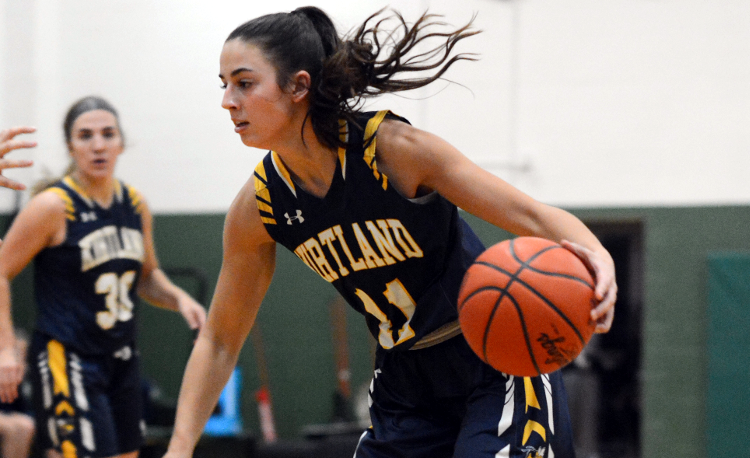 Lauren Snyder and Julia Camino both scored in double figures to lead Kirtland to a 58-24 win over visiting Brooklyn in a Chagrin Valley Conference crossover game on Saturday.

The Hornets used a stifling defense to keep the Hurricanes from finding any rhythm on offense.

“Despite what the score said, Brooklyn was hustling and fighting for every possession which earned our respect,” said Kirtland coach Brittany Zele. “The girls’ defense really shut them down, either forcing turnovers in the half-court or limiting them to one shot and out.”

“They set our tempo,” Zele said of the senior standouts. “The energy they bring to the team has a trickle-down effect. When younger players were on the court today, they were helping direct them—along with Amber (Yurick)–with what to do. That’s something those girls will remember and do in the following years.”

The Hornets used a 23-8 run in the third quarter to put the game away heading into the final eight minutes.

“We had more fast breaks today, which was a focus this week in practice in regard to decision-making and passing,” Zele said. “The girls were patient on offense again which allowed for even scoring among the girls since the assists were being dished out on every set.”

“Amber and Macy are the muscle of our team,” Zele said. “They do everything they can to get rebounds, force turnovers, and get those high-percentage shots. You won’t always see them in the stats but if we do well, it’s probably because those two were getting those hustle points. Leah did a great job on defense and is developing into a threat on offense.

“Reilly was sick yesterday and she came out determined to lead. It’s nice having her there to play with her sister, Corinne, and the other younger girls. Haley had some nice moves on offense. Nikolena and Amalie got their first varsity points today. Overall, it was a fun game.”