Lakeside to lean on pitching staff 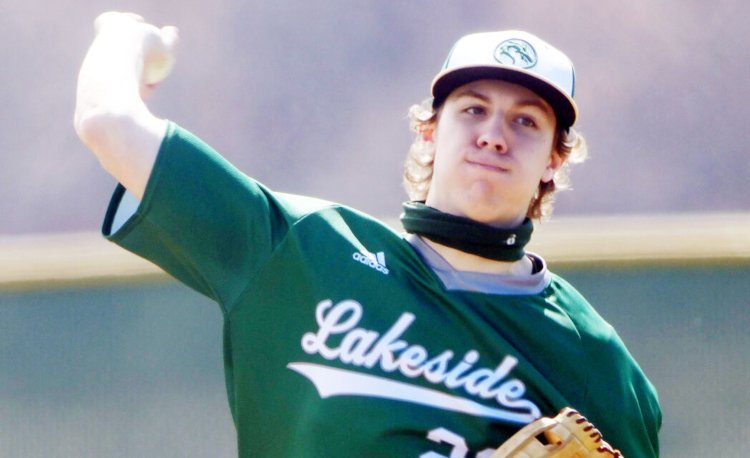 Lakeside returns just four starters from last season but the Dragons do have a deep and talented pitching staff they’ll lean on this spring.

The Dragons, who finished 10-15 overall and 5-7 in the Chagrin Valley Conference Chagrin Division last season, hope to ride that pitching staff until their younger players find their footing.

“We feel that we can once again be very competitive this year,” said Lakeside coach Jared Sziber. “We are bringing back our top two starting pitchers from a year ago– Ashton Wheelock and Cohen Poploske. We will also lean heavily on Garrette Siebeneck to give us a lot of innings on the mound as well. He’s new to pitching but has come a long way in a short time. Our pitching is what will keep us competitive all year.”

Wheelock, a senior pitcher and utility player, has committed to continue his education and playing career at Gannon University. Last spring, he batted .421 with 22 runs scored and posted a 2.10 earned run average in 51 innings of work.

He’ll be a key to Lakeside’s success all season long.

“Ashton is our Swiss army knife on the team,” Sziber said. “He will end up playing multiple positions throughout the year and is our ace on the mound. He was first-team all-CVC, as well as first-team all-Ashtabula County. Ashton breathes baseball. He is nonstop working on his game and is one of the best hitters our school has ever had.”

Poploske, a senior, and sophomore Alex DiSalvatore will join Wheelock in the heart of the Lakeside lineup.

“We will be fairly young team top to bottom, but there is talent,” Sziber said. “It is just a matter of finding the right formula and if these young guys can develop fast or not. We have so many young guys in many important positions, which could lead to some ups and downs. But, we feel that we will be better for it in the long run.”

Poploske, a first-team All-Ashtabula County selection, will start in center field and pitch. He batted .353 with 21 RBI and 20 runs scored last spring while also posting a 3.60 ERA with 41 strikeouts in 31 innings of work.

“He is probably the best defensive outfielder I have had in nine years as a varsity baseball coach,” Sziber said.

DiSalvatore will play first and pitch.

“He is sneaky athletic and will hit in the middle of our order,” Sziber said. “He has a strong presence at the plate and is still not close to tapping into his power. He is a great defender at first base. Even though he is only a sophomore, he has stepped up and is starting to show leadership skills.”

Siebeneck, also a senior, moved from catcher to left field.

“Garrette was our starting catcher last year and will move around a bit more now in the field,” Sziber said. “He is a dirt-bag and will do whatever it takes for the team to be successful. He has come a long way in terms of learning the game as he was new to high-level baseball coming into school. He will be hitting in the middle of our order.”

Junior Malachi Matlock will start in right and will be counted on to kick start the offense from his leadoff spot.

“Malachi is a very dynamic athlete,” Sziber said. “He just started playing baseball once he got to high school and is taking off. He is penciled in to hit at the top of our lineup. His speed is very rare and could be a big-time player for us in the field and on the base paths.”

Crockett will play third, Stitt is at shortstop, Newsome will catch, and Campbell has second base locked down.

“We will be young in some key spots up the middle this year,” Sziber said. “We are replacing our catcher, second baseman, and shortstop, and all with freshmen and sophomores. We know there will be bumps in the road ahead and a bit of a learning curve for all of them, but we love the talent that they possess and feel they can be a part of our core for a long time. We are not very deep, we will probably be about 11- 12 on the varsity roster. The good news is that we can interchange our pitchers in the field as well and not have a drop-off.”

“We really like our pitching as a whole this year,” Sziber said. “At the top, we are bringing back our top two guys from the last few years in Ashton Wheelock and Cohen Poploske. We also have Garrette Siebeneck, Alex DiSalvatore, and Kam Crockett who we expect to give us a lot of innings on the mound. Defense will also be a strength of ours. Many of our guys will be able to rotate in different positions and be effective. Our outfield will be very athletic and is able to cover a lot of ground. The field will be mostly young, but talented.”

Lakeside’s success hinges on the pitching staff’s ability to keep the Dragons in games, especially early in the season as the young guys find their way.

The Dragons also need to play consistently throughout the season.

“We were so inconsistent last season,” Sziber said. “We were Jekyll and Hyde. One day we would play up to our expectations and the next down. We bring back a nice core and love the upside of our group overall. We feel we can be right in the mix of things in the CVC as long as we stay on a level path emotionally day-to-day.”